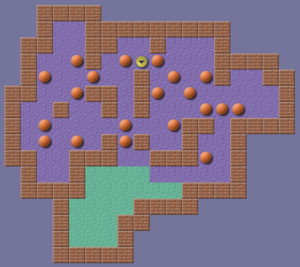 When packing the upper two rows, fill the left column first, then the two goal spaces on the right; this leaves only a 3x2 goal. Place the next crate just above those two crates. Fill the bottom-left space, then move the stored crate to the bottom-right space. Get three other crates into the target area, and finish with the last crate in the bottom-right room. 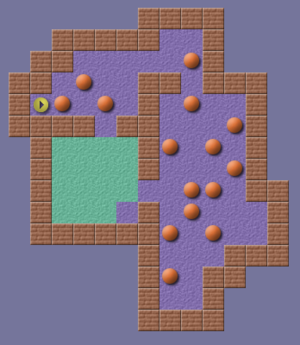 Move the first crate one space right, and the second two spaces right. The crate at the target room doorway gets pushed three spaces down, and is left there temporarily.

Once you enter the right-hand room, start by moving the two crates directly right of the second doorway. Begin clearing the crates above, and adding them to the goal. Once you can move through the top corridor, push one crate through the corridor, and return the crate you temporarily stored in the goal back to the upper-left room.

When packing, first fill the left two columns. Put the two crates in the upper-right of the goal, then the bottom space. The last four targets are filled by pushing crates from the respective rooms. 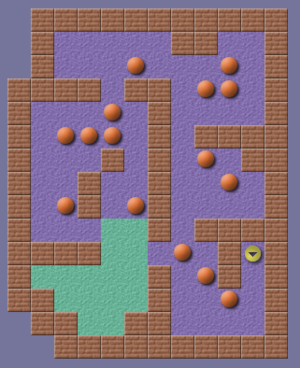 When there are four spaces left at the top-right corner of the target, fill the left column first. 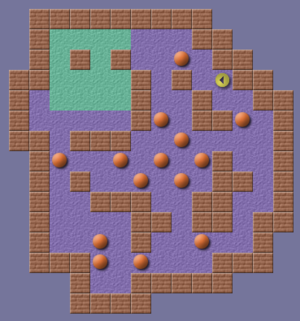 Return to the middle room, hugging the upper wall. When you reach a crate, push it to the right, and push four crates to the top row. The rest of the crates can be removes one-by-one.

To clear the bottom left room, push the lower crate up two spaces, and one to the left. Push the other crate at least one space to the right to allow moving those two crates to the goal. 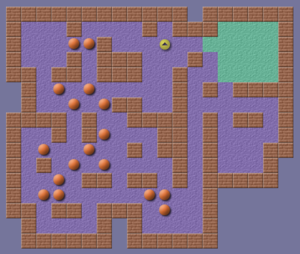 You need to store three crates in the area below the goal before you start to fill the left two columns. After building the storage, place another crate at the bottom of the right-hand column, and fill the top two spaces of these columns. Move the three crates in storage to the goal, then finish by putting the last crate on the entrance. 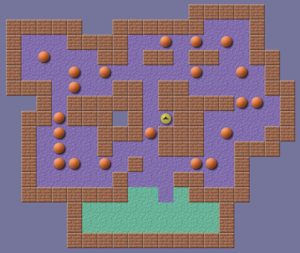 Push the first crate down and into the corner of the goal.

On the left hand side, approach from the bottom left corner. In the lower room, push the upper crate right one space, and the lower-center crate up one space. From here, there should be no issue moving any remaining crates to the exit. 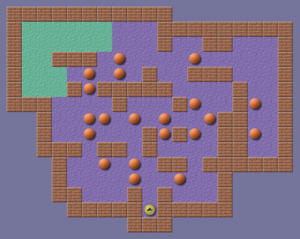 To solve this floor, you need to store 11 crates on the upper set of rooms, all ready to be pushed into the target area.

The top crates should now fit without issue. 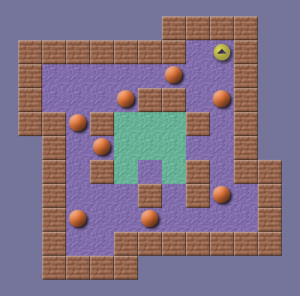 Approach the goal from the top-left, moving crates as necessary. The first crate to move to the goal is between the two pillars on the left. It is placed in the top right corner. The next crate was the one obstructing the top-left entrance, and is placed just below the first crate.

The third is located at the bottom. First, move the bottom-left crate beside the lower pillar on the left, then push the bottom left crate below the same pillar. Push the left-hand crate down to spaces, and get the desired crate at the bottom-right hand corner.

The left two crates should now be placed in the center column, by bringing them in by the top-left corner. The remaining three crates are placed by the bottom-left entrance. 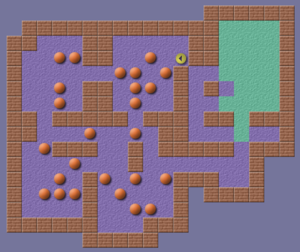 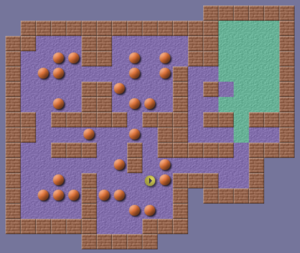 To solve the floor, you need to create a path that will allow you to gradually clear crates. The starting layout is on the left, while the desired path is shown on the image to the right.

When creating the path, one crate is moved from the upper-right chamber to the top-left, and one is returned. Also, a crate in the bottom-left corner is stored in the top-left chamber. 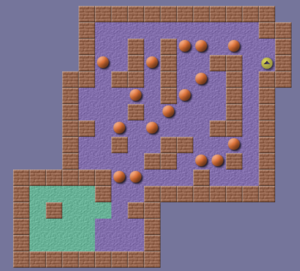 At the bottom-right corner, move the upper crate left two spaces, and the lower-right crate up one.

Move the upper left crate down three spaces, and right one. Next, move the first lower-left crate to the goal.

You now need to unblock the loop at the bottom of the map. To do so, head to the lower pillar, and push the crate just above it into the upper-left room. Push the lower crate up one tile, and create a path along the lower loop. Once the path is formed, push the same crate down one tile before moving it to the goal. You should be able to store six other crates without difficulty.