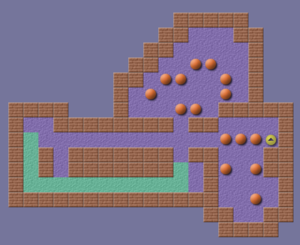 Move the center crate down one space, and push the crate to the left in the corner of the goal. Repeat with the crate that was just left of the starting space. Next, move two crates from the top to the corner, leaving the upper-left target free.

You will now need to store crates from the eastern room to the northern room - aim for the pattern shown above. There should be two crates remaining on the right. One can be pushed from the far left, and the other to the 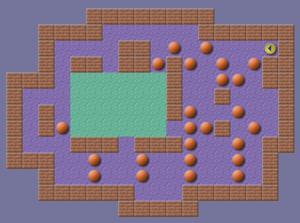 To pack the target, fill the left two columns first (leaving a free row for the left hand-side), then fill the second column from the right (leaving the bottom row free). Add a column on the left. Finish packing by filling the remaining target from left to right. 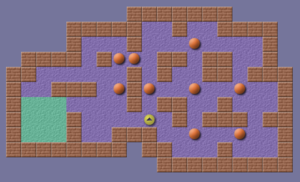 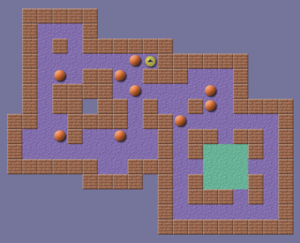 Store a crate in the bottom and right entrances of the goal. Fill the top two corners first, followed by the left column. Any crates remaining through the rest of the level are placed in the center column, with the stored crates moved one space. 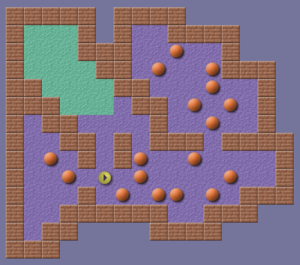 In this map, find a way to store one additional crate at the top-right room. 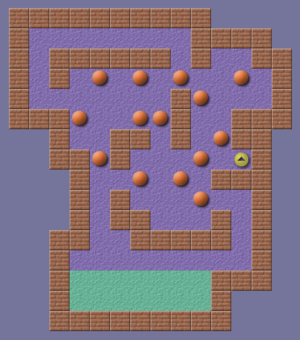 Make a path to the bottom-right corridor. Next, move the crate above the three-space wall to the destination.

Once this is done, start clearing the crates in the bottom room first, followed by the top room. 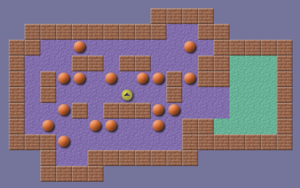 When you are down to four crates remaining, park one of the crates two spaces left of the upper goal position. Put the next crate at the bottom-right, and push the first crate two spaces right. The remaining two crates should fit without issue. 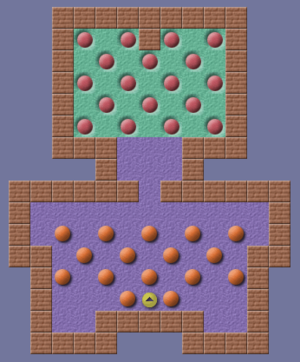 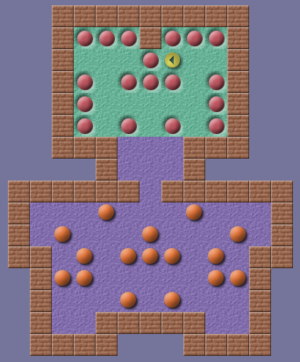 Floor 48, with an open path

The checkerboard layout is intimidating, but possible.

Start by moving up, two spaces left, and two spaces up. Mirror the lower pattern on the right-hand side.

In the goal, push the center crate up one space, move left two spaces, and up two spaces. Mirror the same pattern on the right, then push any remaining crates to the side. If you moved the crates correctly, it should appear just like the view on the right. 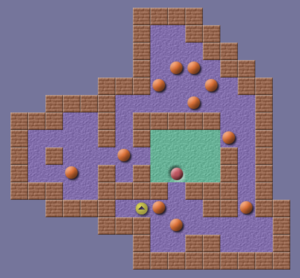 Fill two spaces in bottom right corner, starting with the crate already in the goal, and by the crates in the lower section. Follow this with one crate in the bottom-left, and two at the top-left. The last crate to place is in the middle right. 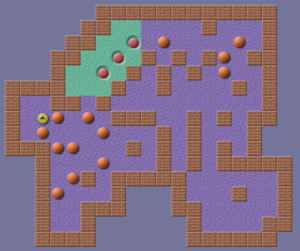 When there are only four crates remaining on the left, begin packing the target area. Start at the bottom-left, When packing, start at the bottom-left corner and continue until there are six spaces left. To fill the last four spaces, store two crates in the top row to the right of the target area. Fill the bottom left corner, and place the next crate on top of the center-right target. Push the top-left crate into position, then push the crate down to fill the bottom row. The remaining crates will fit without difficulty.