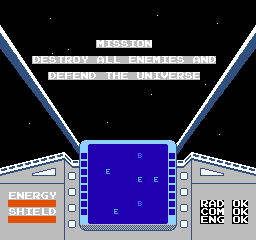 At the start of training mode, there will be two bases, and four enemy squadrons. Two of the squads will be the weaker blue color, and two will be medium-strength gray. Which one is which can only be determined by warping to their sectors.

When you start the game, your cockpit will begin in Map mode so that you can choose a sector to hyperspace to. The enemies will attempt to position themselves next to a base. So a good first choice would be whichever enemy is next to, or closest to, a base. The map is rather easy to read at this point, every B is a base, and every E is an enemy.

In addition to the position of each base and enemy squadron, a date display is visible at the bottom of the map. This date ticks off time continuously, whether you are in Map mode or Combat mode. The important thing to know about the date is that enemies move around the map roughly every 50 units of date time that pases. And if an enemy occupies a sector of space next to a base for 50 units of date time, they will begin to attack the base. If their attack proceeds uninterrupted for another 50 units of date time, the base will be destroyed.

Once you select the enemy squadron that you intend to fight against first, press the A button in Map mode to initiate your hyperspace jump to that sector. Once you arrive in an enemy occupied sector, you will immediately switch to Combat mode. Now you must find and destroy ten enemy ships.

Observe the Long Range Scanner for the presence of any enemies. They will appear as yellow dots on the scanner. You will not be able to see them until they occupy the light blue cone of vision. Additionally, they must not be too high or too low, but if they are, they will gradually seek to reach your level in space in order to fire at you. Orient your craft as they are approaching you so that you are facing them as they arrive. Take a few shots at them as they approach. If they survive the first pass, wait for them to return and fly past you in your direction so you can shoot at them from behind.

Remember that when you fire, you alternate firing from your left wing gun and your right wing gun. By firing rapidly, you can send a near constant stream of bullets at the enemy. Remember that firing uses up an incredibly small amount of energy, but it adds up over time, so don't fire pointlessly at empty space. When aiming for an enemy, the crosshair indicates where the bullets will arrive at some distance away from your ship. However, if you intend to hit an enemy that is much closer to your ship, they need to be close to the bottom of the screen, and off to one side (in the path of the bullet). In general, it is easier to hit enemies that are on the lower half of the screen than the top half.

It is important to note that once you destroy every enemy in the sector, the game will automatically switch you out of Combat mode and back to Map mode. However, it takes a few seconds before this happens. If you're sure that you've defeated all ten enemies, and do not want to waste the time waiting for the switch to occur, you may press Select at any time to make the switch manually. 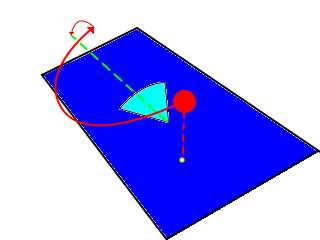 If you sustain heavy damage to any of your subsystems, or are running extremely low on energy, you'll need to make a refueling trip to a base. On the map mode, select a sector of space occupied by a base and warp to it. Once you arrive, you may or may not see the base on your LRS. If you cannot see the location of the base on your LRS, you need to thrust through space. There are many methods to make it appear, but one sure-fire way would be to alternate between the same horizontal motion and vertical motion until the yellow dot appears (e.g. while thrusting, turn left, than up, then left, then up, and so on). Eventually it will appear.

Once you see the yellow dot, you need to orient your ship so that you are facing it. Use the diagram to the right for the following explanation. The blue area represents the plane that you can see on your LRS. The large red dot represents a base, and the yellow dot directly beneath it represents where you see the dot on your scanner. You will start out by rotating the Gaia to the left, which will move the yellow dot clockwise to the front of your ship. (If the base is far away and scrolls off the scanner, stop turning when you believe it is ahead of you.) Even if the dot ends up inside of the light blue cone of vision, you still can't see it since it is above you. Now you press up to rotate the ship towards the base. This will cause the yellow dot to drift further away from you and eventually slow down. The dashed green line represents the path you must now thrust along in order to reach the base. 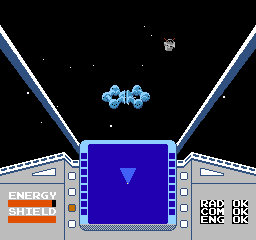 Docking with a base

In the above example, we knew that the base was above us, but most of the time, you will have no idea. If you know the base is in front of you, but you do not see it, you need to make some corrections. Push up or down to see whether the base moves closer to you or farther away. You want to stick with the direction that moves it the farthest away. Eventually it slows down and stops receding. When this occurs, the base will be roughly in front of you, and you can thrust forward to it.

Once the base is in your cross hairs, you need to thrust to it until you are pretty close to it (it will appear as large as possible). When you remain still with the crosshair on the base, the "BASE LOCKED ON" message will appear. Once you remain locked on for a few seconds, the base sends out a shuttle to initiate your refueling and any repairs that need to be made. You can do this as often as you need.

When every enemy squadron is defeated, you will be presented with your final score, and a final performance rating. At first, it may be difficult to finish under 300 date units, but with experience, it should be possible to finish around 240. Most important to your score is the survival of both bases. The loss of one will significantly impact your rating.