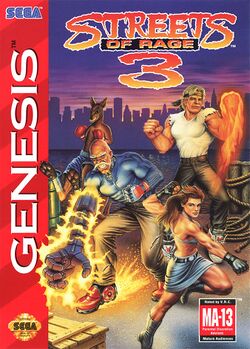 Streets of Rage 3 (Bare Knuckle III in Japan), first released in 1994 for the Sega Genesis, is the third and final game in the Streets of Rage series of beat 'em ups. Using a larger 24-megabit (3 megabyte) cartridge, it features more moves and characters, a more complex plot, multiple endings, and longer rounds than the previous games. As well as being far more difficult than its predecessors, it has also been criticized for having an abrasive and noisy soundtrack, more experimental than the previous two which used more melodies and dance beats.

It was later released on GameTap, and on the Wii Virtual Console on September 24, 2007. It is also included in the Japanese version of Sonic Gems Collection (it was excluded from other regions to get lower age ratings).