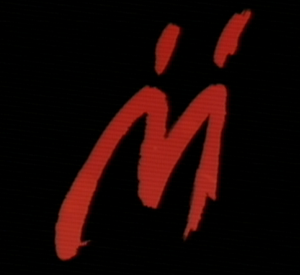 The mysterious "M" logo that you'll see around Isle Delfino

Before you start the game there is a cutscene where Mario , Princess Peach, and Toadsworth are on a plane. The in-flight movie shows an introduction to their destination, the vacation paradise of Isle Delphino. Mario dreams of the seafood, Toadsworth is looking forward to relaxing on the beach, but Peach notices a strange shadow that somehow looks like Mario.

The cutscene continues when you start a new game. The plane comes in for a landing but comes to an abrupt stop because there is something blocking the runway. When you get out of plane, you see that it was sticky orange and yellow goop on the runway and the Peach catches a glimpse of the shadow she saw in the movie. Toadsworth asks you to see about getting some help and you start playing the game.

If it's your first time playing the game then you might want to just have a little look around the area and practice running, jumping, climbing trees and swimming. If you've played Mario 64 then the controls are nearly the same, otherwise consult the game manual or the Controls section of this guide to get the basics.

Speak to Toadsworth, Peach and the toads and they'll fill you in on what's happening. Most of the toads will warn you not to touch the goop because it's slippery and dangerous. So heeding this advice, head to the other end of the runway. You may meet one of the island's native residents, the Piantas, on the way and she will point to her friend who is trapped inside the goop.

There are more Piantas at the end of the runway and the one in the straw hat gives you hint on what to do next. But you may want to explore a bit first; it's a very small area so don't worry about missing anything or getting lost.

The pump the Pianta in the straw hat was talking about is right next to him, near the two large square tanks on the left. When you get close you automatically pick up FLUDD who will introduce itself with a short cutscene explaining the basics of how to operate it. After the instructions, spray the large letter "M" painted on each of the two tanks as a little practice task. You might also want to practice a bit with the Hover nozzle here but it's not needed until later. Now you're ready to battle the huge puddle of gunk on the airstrip.

Head over to the gunk puddle and spray the edges of it with FLUDD. If you want to you can spray the paint off the Pianta that's stuck in the puddle before taking on the boss; he doesn't seem very grateful if you do but it's good practice.

Spray lots of water on the large blob in the centre of the puddle; you may see some sparks telling you it's working. This awakens a mini-boss called a Piranha Plant. (It's similar to the Piranha Plants in Mario 64 but it's covered in goop. Spray water into its mouth three times to defeat it, but if you take too long then it will disappear back into the puddle and you must start over. You will be rewarded with your very first Shine Sprite.

As soon as you collect the Shine, another cutscene begins. Peach congratulates you on the victory and is admiring the job you did and Toadsworth is admiring the FLUDD device when the Delfino police arrive and take you away! (You won't be able to visit this area again until near the end of the game. See Secret Shines for details.)