The first chapter should serve as an introduction to controlling and fight with Superman throughout the game. You begin, as always, as Clark Kent in the Daily Planet building.

Inside the Daily Planet, you can speak with Lois Lane, Jimmy, and the Copy Chief to get an idea of what's going on. Lois will inform you that strange things are going on near "Metro Park", and that you can see it's location by pressing

. By Metro Park, she means Metropolis Park. Head left to the door of the office and press

to exit and head outside. 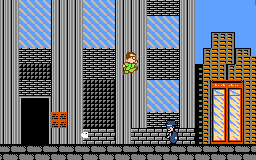 As soon as you exit the building an armed gang member will be waiting outside. They tend to shoot almost immediately upon appearing on the screen. Your best bet is to jump up in the air as soon as you see them in anticipation of their gun. Once up in the air, you can leap over the gang member and the bullet he fires, and continue right towards the first phone booth. Press

to enter the phone booth and, voilà, Clark becomes Superman. Now you will run faster and punch harder, as well as have access to all of your super-powers.

Getting to Metropolis Park[edit]

Fast track it by flying[edit]

While you have the option to walk to Metropolis Park, it is far faster to fly there. However, by flying to the park, you may miss out on some important opportunities to power up your special abilities. If you wish to fly, press

to bring up the sub-screen, and move the cursor to activate the Super Flight power. Press

again to return to the game, (beat up the gang member if you like), and press

to launch into the air. The map will come up, and two locations will be lit up, Mt. Royal and Metropolis Park. Obviously, you want to fly to the park, so press

until the cursor rests under the right location, and press

to begin flying there. You will be shown an overhead view of Superman flying over the streets and buildings of Metropolis as he streaks toward his destination.

Why fly when you can walk?[edit]

Walking takes a bit longer, and you run the risk of sustaining damage on your way to the park. But along the way, you'll be able to collect some useful power-ups that may make the rest of the game a bit easier for you. After turning into Superman, continue running right, past the subway entrance (which you can't use at this point), and on to the next screen. You will end up in front of a building, the Government Tower. Head inside, and you will find a gang of punks. Beat them up, and when you do, a blue Super Breath-2 icon will appear. Collect it, and you will increase the length of your Super Breath-2 meter. But that's not all. 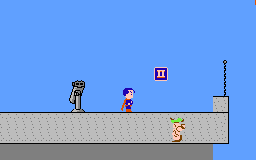 Step back outside, and activate your Super Flight power. In addition to flying to other locations, you can use it to investigate the tops of certain buildings. If you hold

, you'll get to watch Superman soar to the top of the building. There you will find three more thugs to beat up. When you finish off the last, he will tell you that he will let his boss know at the Apollo Theater in Metropolis Park. After that, another Super Breath-2 upgrade will appear. Both of the upgrades collected from the Government Tower are not available to Superman in any other chapter, so if you don't collect them now, you will never get them.

Now you can jump off either side of the building to return to the ground. Since you flew up the building, you probably won't have enough energy to fly to the park. That's fine since there is another opportunity to collect an ability power-up along the way if you walk. Continue running right for several screens, noting the names of the buildings you pass along the way. One of the first buildings you'll pass is the Prescott's Department Store. It has a changing room in the back which you can use to transform to and from Superman. Eventually, you will reach a peaceful block with no enemies, although the citizens have very little of use to tell you. You will pass Hunter Jewelry and McKeesport Art Museum, and arrive at Jewels by Alexander (on the map, it is below the "T" in "MCKEESPORT"), where your Super Hearing will detect someone crying for help. Head inside and defeat the gang members attempting a robbery, and another Super Breath-2 power-up will appear.

Now your Super Breath-2 meter will be long, but unless you fight enough gang members to pick up some Super Breath-2 refills, it won't do you much good. As you run to the park, be sure to take on all thugs in an effort to fill up the meter before you reach the Apollo Theater. Continue running right and make a note of where the Computer Center and Metro Tower are along the way, you'll need to return to those locations later. 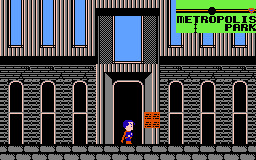 Whether you ran through it, or you flew to the end of it, the park is full of low-lives and thugs that you can choose to deal with or ignore. If you flew here, there will be no indication as to whether the trouble you are seeking out lies to your left or right. As it happens, it lies to the right, so run in that direction. You will exit the park and enter another block of buildings. There will be more thugs for you to deal with. The first entrance you come to will be the Wexel Company, and the interior contains a couple of enemies, but nothing important. Continue right, past a telephone booth until you reach the next building, which happens to be the Apollo Theater. This is the building you must enter.

Note: If you continue to run right, past the theater, you will enter a dead-end street. At the end of this street are two FBI agents, one of whom will inform you that zombies can be stopped with cold breath. This is important information that you should make use of in the theater.

Once inside the theater, you will discover a new type of enemy: a zombie. The theater is crawling with them. No matter how many times you punch them, they will refuse to go down unless you hit them with a blast of Super Breath-2 first. Once you do that, they will stand completely motionless and drop after two hits. While you may be tempted to simply race past the zombies and get to the boss, you would be missing out on a great opportunity, three in fact. Some buildings (and even some outdoor locations) contain sections where you can receive a super-power upgrade if you clear the area of enemies. The first three floors of the Apollo Theater happen to be such an area.

It's worth it to take your time and slowly eliminate all of the zombies on the first three floors in order to obtain the super-power upgrades they provide. Once you clear away the zombies on the first floor, you will receive a Super Spin upgrade. Then drop down through the gap in the ground to the floor below. Clear the zombies here to receive an upgrade to your X-Ray Vision. Drop down to the next floor and clear those zombies to get an upgrade for Super Flight. After that, head down to the floor below, which happens to be the last floor. There you will find a group of armed gang members. Dodge the bullets they fire at you and take them out until all you are left with is the boss. 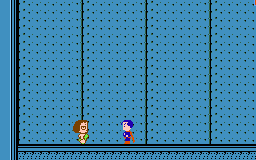 Who is Zaora?
In the evil Kyrptonian gang lead by Zod, there is a woman named Ursa who appears as a villain in the second Superman movie, and who you will fight at the end of the game. She is based on a character from comic books named Faora. Faora, who hates all men, is seemingly renamed Zaora when she is trapped in the Pocket Universe following the Crisis on Infinite Earths. While she and Ursa are based on the same character, they are not the same person. As a Kryptonian, she has all of the same powers and strengths of Superman.

The boss of this chapter is a woman who is identified as Zaora by the thug on top of the Government Tower. She wears an eye-patch and carries a whip. She's also quite fond of leaping into the air and jumping over, or on top of, Superman as she fights. She doesn't require any complicated strategy. Simply stand on the ground and punch the air in front of you repeatedly. She will walk into your attacks. When she jumps in the air, move out from beneath her in the opposite direction, turn around, and continue punching. If it's going to slowly for you, you can attempt to close the distance between you, but that will increase the likelihood that she will hit you with her whip. Even if you sustain too much damage and revert to Clark Kent, don't give up! You will do less damage with each punch, but you can still beat her. Once you do, she will go down in an explosion, and the Daily Planet headline will announce your victory (mistakenly crediting you with the defeat of the Zod Gang who you won't encounter until the end of the game.) Then it will announce trouble in the Stock Market, which you'll have to investigate in Chapter 2.