When you begin the final chapter in the Daily Planet, your chief wants a story about the monsters, and Jimmy has nothing helpful to add. As usual, you get your best clue from Lois Lane, who informs you that the two FBI agents that you've been meeting, known as the Bubble Gum Brothers, are waiting for you in a park in Senneville. 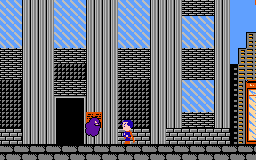 When you exit the building, you may think all is safe on the streets of Metropolis, but it won't take long for you to bump into an invisible force. As Clark Kent, you will be unable to see the danger until you dash into the phone booth and become Superman. Than you can use your X-Ray Vision to see the invisible monsters. In fact, all of the streets of Metropolis feature invisible enemies, so it will be wise to keep your X-Ray Vision ready and fill its meter as much as possible. 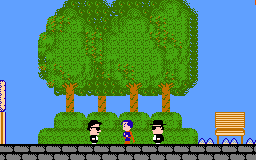 You'll need to hike to Senneville to find the FBI. You can save yourself a bit of time by flying to Andersonville, and walking the rest of the way. However, you will really want to have your Super Flight power available when you find the agents, so if you use it, don't forget to fight some monsters indoors to refuel your meter.

Remember to activate your X-Ray Vision as soon as you enter each new screen. Be prepared, you won't just encounter the ghost-like blobs along the way, you'll also encounter the fire-breathing demon cats as well. You'll finally meet the B.G. Bros. when you reach the park on the far left side of Senneville. After walking all that way, they will tell you that they think the monsters are hiding out under Metropolis Park, which means you need to go back entirely in the opposite direction. 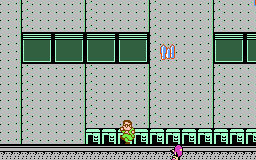 Clearly you will be doing yourself a great favor by flying as close to Metropolis Park as you possible can. If you can't reach it directly, even flying as far as McKeesport, or CBD would be helpful. Then you will have far less to walk, and far less to fight along the way. Losing too much energy and reverting back to Clark Kent is especially detrimental in this chapter. Since Clark can't activate the X-Ray Vision, you will not be able to see the enemies on new screens when this happens. Your best bet would be to run inside a building with enemies that you can see, and beat them up to restore as much energy as possible (not simply enough to become Superman again) and then find a phone booth as quickly as possible. If you need to travel a little bit, punch continuously as you run in hopes of knocking a dangerous invisible enemy out of your way before they can hurt and possibly kill you. 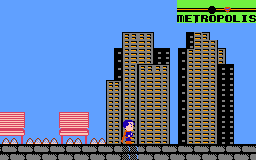 The area you're looking for is in the middle of the park. You will find two benches with a view of some skyscrapers behind them. Nearby is a column of dirt in the ground that looks like you can spin through it. Activate your Super Spin power, and drill through the ground. It's the same situation below ground as above: the enemies will be invisible until you use X-Ray Vision, so activate it as soon as you arrive. Be sure to come in with a good supply too—if you run out of X-Ray Vision down here, not only will you be at a distinct disadvantage against the invisible enemies, you won't be able to see the one you need to kill for the next clue. 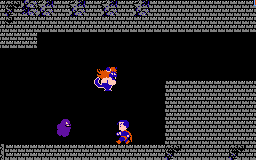 At first, the underground passage offers no choices in direction, but soon you arrive on a floor with two ladders that lead down and a third that goes back up. While you're free to explore the lower passages, they simply loop back around to this same level. Your goal lies beyond the ladder leading up. Climb up this ladder, and the next ladder that you find until you reach a top level. Activate your X-Ray vision, and you will see a blob and a demon cat. If you kill the blob, he will tell you that their bosses are waiting for you on Freedom Island.

Regretfully, this is once again on the far opposite side of Metropolis… 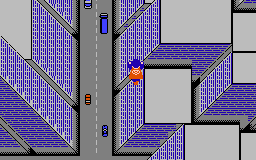 After you defeat the informative blob, you must exit from the underground passage and return to the surface of Metropolis Park. But now you must travel to the far left side of Metropolis to get as close to Freedom Island as possible. The closer you can fly to Senneville, the better. In fact, if you fly to Senneville on a full complete meter of Super Flight, you will still have enough power left over to immediately jump to Freedom Island. If you do not have enough power, get as close as you can to Freedom Island in Senneville, and visit buildings and fight enemies inside who are likely to provide you with Super Flight energy until you have enough to make the flight over to the island. 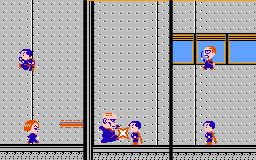 Once you're on Freedom Island, step inside the base of the "Statue of Freedom." On the first floor, you will be attacked by three relatively harmless robots. Remove them from the room and climb up the steps. On the second floor, you will face off with Ursa. While you can proceed to the next floor without defeating Ursa, you won't meet the next member of the Zod Gang there until you do. Ursa possesses the same Heat Vision as Superman. Defeat her as you would any other boss, and move up to the next floor. On the third floor, you encounter Non. Non has Superman's Super Breath-2 ability, and uses it against you. Once again, you must beat Non in order to face off with Zod on the floor above. After Non is defeated, climb the stairs to the fourth and final floor where Zod awaits. You may be let down to discover that Zod is really not much more difficult than the previous two gang members. He has both the Heat Vision and Super Breath-2 weapons of the other two, and he brandishes a sword, but the strategy to use against him is the same: stand still and let him run into your continuous punching, moving only to get out from under his jumps.

Once all three members of Zod's gang are defeated, they will be hurled into space and trapped in the mirror cell that they were originally captured in, and you will see the ending of the game. Congratulations.