Tetris (styled TETЯIS) is a puzzle game developed by Atari Games and originally released for arcades in 1988. Based on Alexey Pajitnov's Tetris, Atari's version features the same gameplay as the computer editions of the game, as players must stack differently shaped falling blocks to form and eliminate horizontal lines from the playing field. The game features several difficulty levels and two-player simultaneous play. Atari later ported the game to the NES and released an unlicensed NES version in 1989 under its Tengen brand.

The game ran in B-type mode, where each level was cleared after 10 or more lines, and points were awarded for each empty row at the top of the playfield. Challenges included various patterns of starting garbage and randomly appearing single blocks in the playfield.

The rotation rules are identical to those of Tengen's NES port, except the tetrominoes are colored differently, and they do not change color once they lock. In addition, the player can rotate the tetrominoes only counterclockwise. 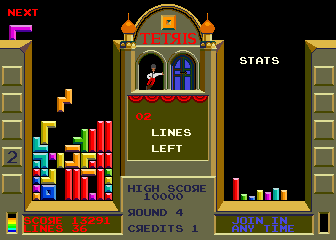 The arcade game only offers a "B-type" mode of play. Each level has a number of lines to clear. Once this number is reached, the player is taken to the next level. In each loop, every three levels has a special gimmick added in an attempt to make the gameplay harder:

On Level 19 and up, the game combines "Handicap Start" with "Added Blcoks".

The score for each Tetromino that the player places is d*r*(r + h), where

In a two-player game, finishing the level before the other player gives a 2,000 point bonus. This bonus is awarded both for skill and for putting more money into the machine.