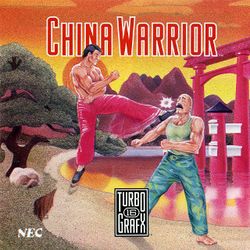 China Warrior, known in Japan as The Kung Fu (THE 功夫 (ザ・クンフー), The Kung Fu?), is a horizontal beat 'em up video game created in 1987 by Hudson Soft for the TurboGrafx-16. The game was ported to mobile phones and the Hudson Channel for the PlayStation 2 exclusively in Japan with redone graphics and gameplay. The TurboGrafx-16 version was also released for the Wii Virtual Console and on the Japanese PlayStation Store.

The object of the game is to walk through each stage while throwing punches and kicks at enemies and objects. There are four stages which are broken down into three stages each, for a total of twelve stages. When the player gets knocked out in a stage, the game starts over at the beginning of that stage. Players can memorize the object/enemy pattern in order to get through the stage easier whenever Wang gets knocked out. At the end of each level, there is a boss fight. The control was essentially designed to be similar to the arcade game Kung-Fu Master, but with gameplay similar to Gladiator without the sword nor shield held in hand. The graphics utilized very large character models that fill up the screen. They were capable of moving without any graphical flickering.

In 1987 the character size and detail was essentially a positive selling point for the title in Japan, although the release would not reach US until 2 years later. By then the title faced much tougher competition against games like Last Battle and Altered Beast. IGN denounced the game for its overly limiting gameplay, forcing the player to constantly move right. In addition, while the graphical advancements of the game were prominent, many felt that they were not substantial enough to pardon the game's critical flaws. In the game's review for Wii's Virtual Console, IGN and GameSpot gave the game an abysmal review, citing bad graphics and repetitive gameplay, among other things. The game was also featured in 1UP's "Broken Pixels", a show dedicated to mocking bad videogames.

A Chinese martial artist named Wang (王（ワン）, Wang?), whose style resembles that of Bruce Lee's, embarks on a mission to bring down opposing enemies and the Dark Emperor, who stands atop the castle, Lu Hao Yang (洛陽閣（ルーヤンカク）, Lu Hao Yang?) in China.