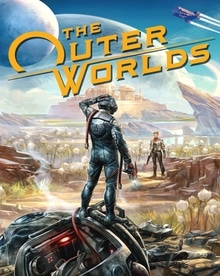 The Outer Worlds is an action RPG developed by Obsidian Entertainment and published by Private Division. It incorporates many gameplay elements of the Fallout series, owing largely to the developers' prior involvement in developing the Fallout franchise, the last of which was Fallout: New Vegas. Like Fallout, Outer Worlds allows the player to shape their character based on the many decisions that they make throughout the game; character possibilities include an all-out action shooter, a skilled negotiator with or without comrades, and worst of all, a villain. This gameplay is mixed with an interstellar setting akin to Mass Effect, allowing the player to explore a multitude of planets. At the story's outset, a mad scientist sends the player to save his colony and avoid "the Board," a powerful, money-hungry entity that rules with an iron fist and consequently affects people across the galaxy. The path taken following this depends entirely on character creation, leading to one of three main endings.