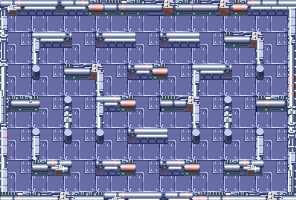 When Naka-G1 (which is operated by a Moonil) drops down to the ground from the top of the screen, four Heitai (from Toy Pop, 1986) will be generated in the corners of the maze; Naka-G1 will walk around the maze while firing lasers at the ground to make it fall in temporarily, and if one of the Heitai falls into one of the holes it has created, it will die, but you can also be a victim of this. The Heitai on this stage are also not worth any points - and every time one dies, another one will be generated to take his place. Once you have drained all of Naka-G1's energy, it will start to explode and degenerate, as if it had been through a car crusher; Pitt and Patti shall then do their somersaults, as their Tinker Balls jump across the maze to them, and the text "GREAT CLEAR!" appears on the screen. They will both then receive 10000 points for every second they had remaining (the maximum is 99000, but they will of course end up with less) - and you will now be treated to a cutscene in which Pitt and Patti watch the operator Moonil, a Heitai, a Pooka (from Dig Dug, 1982), a Fygar (also from Dig Dug), a Timbot and a Pachick (even though they haven't appeared yet) emerge from the wreckage of Naka-G1 and walk off the right side of the screen. Pitt and Patti will then follow them over to a hexagram, that Maō is standing in the centre of, as he casts a spell to make them warp to the second half of the game; they will then do the same and go on to the fifth world, Uchū no Sakai-iki Gyaraon (宇宙の界域ギャラオン).