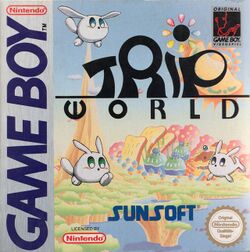 Trip World is a platform game developed and published by Sunsoft for the Game Boy in 1992. It was released exclusively in Japan and Europe, never seeing a release in other parts of the world.

The game is a traditional side-scrolling platformer starring the rabbit-like hero Yacopu (Yakopoo in Europe), who must venture through various Worlds (each consisting of a single, large stage rather than being divided into multiple ones) and defeat a boss at the end of each on his quest to recover the Maita Flower that was stolen by a mysterious figure. To get through the Worlds, Yacopu can change at will between three different forms, each with its own strengths and weaknesses, as well as pick up power-ups that temporarily let him gain special abilities.