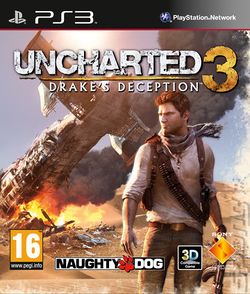 Uncharted 3: Drake's Deception (アンチャーテッド 砂漠に眠るアトランティス, Anchateddo:Sabaku ni numeru Atoranteisu?, lit. Uncharted: the Atlantis Sleeping in the Sands) is the third game in the Uncharted series, created by Naughty Dog for the PlayStation 3, and was released in North America on November 1, 2011, Europe on November 2, 2011 and Australia on November 3, 2011. It is the sequel to one of the most critically acclaimed games of all time; 2009's Uncharted 2: Among Thieves.

Uncharted 3 sees protagonist Nathan Drake and mentor Victor Sullivan traveling around the world to such places as the Rub' al Khali desert, in search of the legendary lost city, the Iram of the Pillars. Chloe Frazer and Elena Fisher also return in Uncharted 3. The plot draws from the archaeology days of T. E. Lawrence. Arne Meyer, Naughty Dog's community strategist stated that the "main theme of Uncharted 3 is 'finding the way'". Uncharted 3 has received universal critical acclaim from critics, making it one of the highest rated video games released in 2011.