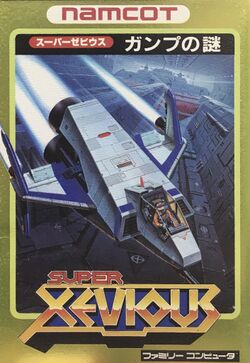 Super Xevious: Ganpu no Nazo (スーパーゼビウスガンプの謎, suupaa zebiusu ganpu no nazo?, lit. Super Xevious: GAMP's Puzzle), often transliterated as Super Xevious: GAMP no Nazo, is a vertical scrolling shooter developed for the Family Computer by Namco in 1986, and not to be confused with the update to the original arcade Xevious called Super Xevious. Unlike the original Xevious, this version was not designed by Masanobu Endoh, who had left Namco by the time this game was in development. Endoh opposed the idea of creating a sequel to Xevious, as he felt it was unnecessary. Presumably, Namco was hungry to cash in on the success of Xevious, so they created this game.

Ganpu no Nazo contains some key differences from the original Super Xevious, including discreet stages which are not composed of vertical strips of the same basic terrain. The "no nazo" portion of the game's title means riddle, mystery, or puzzle (literally "puzzle of GAMP"), and thus each stage contains some problem that the player must solve in order to advance to the next stage. These solutions may include flying into a certain portion of the screen, collecting a particular power-up, or destroying a particular target. If these objectives are not met, the game repeats the same level at an increased difficulty. This game also introduces power-ups to Xevious, which include a rear-firing Zapper, shields, and a larger Blaster.

The "ganpu" or "GAMP" portion of the title refers to the General Artificial Matrix Producer, the super-computer intelligence that controls the enemies that the player fights.