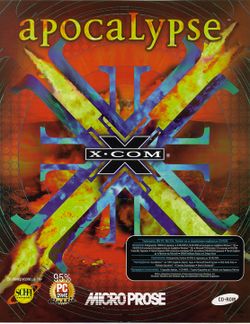 X-COM: Apocalypse is the third game in the X-COM series of computer games. Developed by Mythos Games and published by MicroProse, it was released in 1997 for MS-DOS and Windows.

Similar to the first two games, Apocalypse features a map-like "management" mode (the "Cityscape") and an isometric "combat" mode (the Battlescape). The management mode takes place in a single city, called Mega Primus, rather than being spread out over the entire planet Earth as in the previous games. In addition, Apocalypse was the first game in the X-COM series to include a real-time combat option as well as the traditional turn-based mode.

Apocalypse features a re-done interface with new graphics. It is more complex, and the task of keeping and increasing the funding of the X-COM organization now extends to not only intercepting UFOs, but also to minimizing collateral damage, preventing alien hostile takeovers and even raiding the buildings of other organisations, of which there are several in Mega Primus.

A new feature is the choice of playing the tactical missions in either the familiar turn-based mode or real-time. In the turn-based mode, the aliens and humans switch turns to perform actions while in real-time, everything happens simultaneously, though the game can be paused at any time to issue orders to agents.