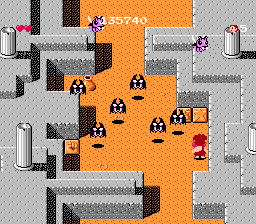 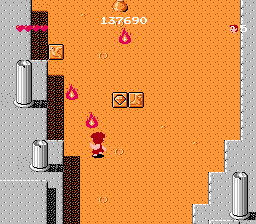 The beginning of the desert stage starts out fairly open, which makes it easier to dodge enemy bullets. Don't get used to it however, because before too long you will have to navigate through narrow passageways like the ones depicted to the left. In these areas, having the flame weapon can be a bit of a liability. But continue to fire into various open areas to reveal hidden tiles like Star tiles, and the Wing tile you will discover before the quicksand section begins. The Wing tile won't be as useful as it was in the first stage. 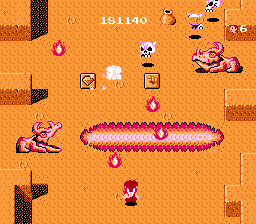 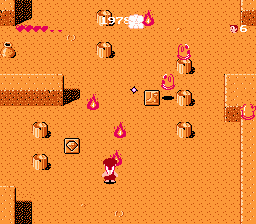 After the first quicksand section, you will come upon the first set of fire breathing triceratops. These large dinos are stationary, but breath a giant blast of flames horizontally across the screen. One touch is lethal and causes instant death so time your movement past them carefully. After a short break, the second set appear. Then you will cross through an open area dotted with the bottoms of pillars which will block your shots. If possible, position yourself so that your attacks continue uninterrupted. 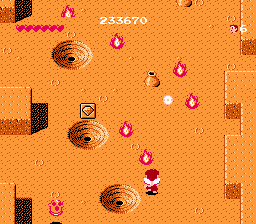 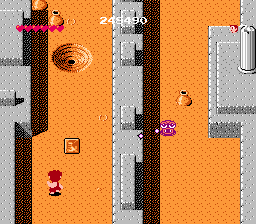 Enemies will continue to fly towards you through the next quicksand section. If you still have the flame weapon, you should be fairly safe. Watch your footing as the screen continues to scroll forward, and don't get to close to the egde of the quicksand holes. Eventually, a structure will divide the screen into two halves. Pots on the right will likely lure you to that side of the screen in an effort to reveal their contents, but the one and only Riki tile is actually hidden on the left. It is possible to collect all three diamonds from the right before doubling back and taking the left side. 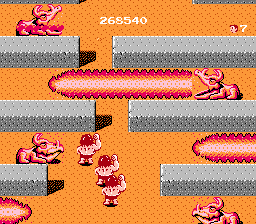 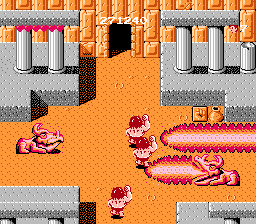 Shoot continuously on the left half of the screen until the Riki tile is revealed, and collect it. At this time, you have to keep your eye open for bullet fired from enemies which are stationary and pop out of the ground on the right side, as well as bats which cross the screen. Being Dino Riki will not help you avoid the attacks of the next set of triceratops, but you should still be able to fire off enough images of yourself to keep the enemies at bay. Even if you were unlucky and happen to get struck on your way to the cave entrance, there are two attack power-up tiles just to the right before the boss. 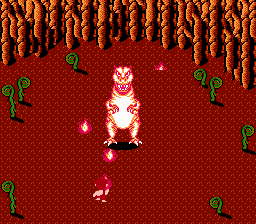 The boss of stage 2 is a flame spewing Tyrannosaurus Rex. He moves about his lair a bit more uniformly than the Pterodactyl did, and he pauses before breathing forth a large quantity of flames. Once again, by constantly firing your weapon, you should be able to neutralize his attack. Stay just below him as he moves about the lair, firing up at him until he is defeated.