This is the final set of 10 puzzles. With the exception of The Future, they may be completed in any order. 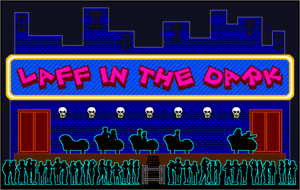 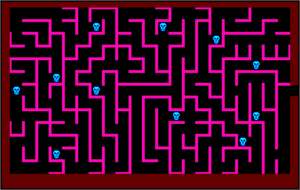 Solve the sign first - it should take two rows, but you will notice that it isn't placed at the top or bottom.

Next, solve the rows one at a time. The skulls below allow solving one row, and you should be able to solve the crowd from there. If you have difficulty with the top, remember that the building heights should match, and that the word at the top spells "GHOSTS".

In the MS-DOS version, it is slightly more difficult to solve the crowd, but there is a one-pixel row below the carts that can be set correctly.

The jigsaw is followed by a maze. The maze itself isn't too difficult, if it weren't for the walls being invisible until you try moving through them. Despite that trick, it is solved through the simple tactic of feeling for and following either the left or right hand wall, or by looking at the solution on the right. 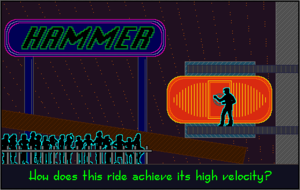 This is a jigsaw puzzle. Solve the text first, followed by the sign. The crowd should naturally be solved by now. Next, solve the vehicle portion of the ride, noting that you should pinpoit it because of the sign. 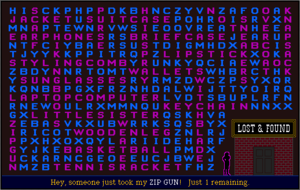 There are four puzzles that require concatenating letters to form attraction names (some of which don't have puzzles.) The ultimate solutions are:

After finding the Lost and Found, you will do one word search. 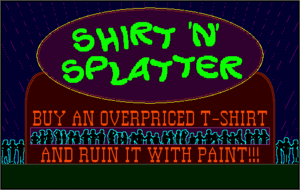 This follows a standard jigsaw formula: Solve the sign first, then the lower text.

After the jigsaw, you get to draw artwork with the mouse. The MS-DOS version is simple clicks of the mouse, while the Macintosh version requires to paint for at least one minute. 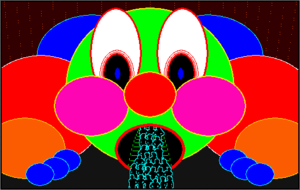 In the first jigsaw, complete the white eyes first, and continue with the mouth. With those in place, you may extend outward to finish the two arms on the side. With the MS-DOS version, you have to focus on the eyes, nose, and side claws before finishing the arms, since the shading makes it harder to tell the arm segments apart. 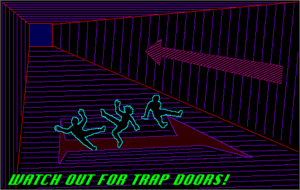 In the second jigsaw, complete the text first, then the person attached to the text. This should then flow to the diagonal line between the floor and wall, then the arrow on the wall. The MS-DOS version allows you to complete the people cleanly, making this jigsaw easier, but the arrow is moved slightly to the left. 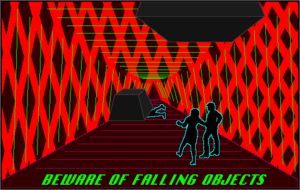 In the third, complete the text first, which should fill the entire bottom row. You can then place the two people, as well as the crushed individual further along the corridor. Finish the walls and ceiling by matching the lines. 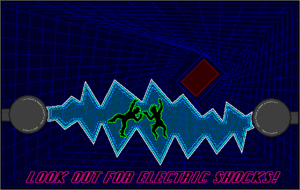 For the final jigsaw, complete the text first. This will join with the electric field, and the exit in the background. Finish the top row by ensuring the corridor moves smoothly, which may be difficult on some platforms with the dark colors. While the MS-DOS version has the text separate from the electric field, it poses almost no additional difficulty in solving the puzzle.

There are four word squares that need to be completed:

You then need to complete two phrases by concatenating letters. These phrases are easy to spot if done correctly, and are "This ride cost so much to build that...", and "...they couldn't afford to finish it."

This is a more challenging polyomino puzzle, since the pieces aren't in one piece. However, they can be solved by forming the words in the middle of the puzzle:

After this, you need to complete a series of phrases. 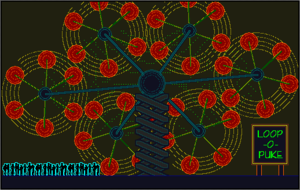 This starts with a jigsaw. It is easiest to solve the base first, whch places the crowd and sign. Next, solve the center stem to allow placing the spokes on the ride.

This is followed by a few anagrams:

This puzzle is a simple series of word searches, containing a list of injuries common at Hazard Park. 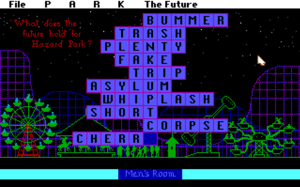 This puzzle must be completed last.

It is a simple crossword puzzle, where you find clues from the other puzzles. Each row is related to another puzzle, which displays the highlighted word in plain view.

In the MS-DOS version, there are two words that can't be easily reviewed. The line for Skyway, although easily guessed, is "TRASH". In Skin the Cat, you need to resolve the six word squares to find the word is "ASYLUM".

When all words are in place, the aftermath and credits are shown.