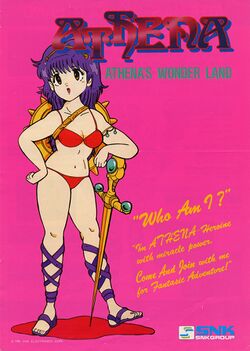 For the company, see Athena.

Athena is a platform arcade game, produced and published in 1986 by SNK. The game features traditional role-playing game elements. Princess Athena has to beat the boss of each stage by using miscellaneous mythological weapons, equipments and items. Without some items, she can not make it through the adventures. Everything in the game is inspired by Greek mythology or ancient Roman culture including weapons, equipments, items and enemy designs.

The game was ported to the Famicom and NES platform by Micronics. This port of Athena is considered one of the most difficult to finish in the NES library, due to its length, lack of mid-level checkpoints, and unforgiving play control. Conversions were also done for the Sinclair ZX Spectrum and Commodore 64 in 1987 by Ocean Software under their Imagine label, published only for the European market. (Despite popular belief, a conversion was never released for the Amstrad CPC.)

Athena (based on the Greek goddess of the same name) is a selfish princess of the Kingdom of Victory, which inhabits a mysterious world. She grows bored with the monotonous life day by day in her castle and desires exciting adventures. One day she opened the Door Which Shouldn't Be Opened in the basement of Castle Victory, and fell to another world called Fantasy World which was dominated by an evil emperor Dante, a creature based on Cerberus.