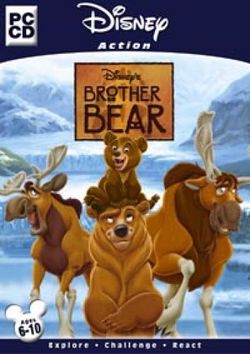 Brother Bear is a Disney game targeted at 6 to 10 year olds, the goal being to control Kenai, the hunter who has been transformed into a bear, through the levels whilst Rutt and Tuke (the moose) tell the story. The plot is similar to the film and so you are journeying to the mountain where the light touches the earth.

While on this journey, Kenai is constantly being followed by his brother, Denahi, who believes that Kenai actually killed him in his human form, whereas he was just transformed into a bear after he killed Koda's mother (he didn't know at the time) by his older brother who was already dead, Sidga.

During the game there are certain levels where you have to roar at Denahi to knock him out until his health is empty. You won't have killed him, just knocked him out. There are also minigames such as sliding down mountains, and having races to catch the most fish.