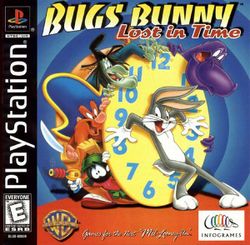 Bugs Bunny: Lost in Time is a three-dimensional Looney Tunes-themed platform game, developed by Behaviour Interactive for Infogrames and released for the Sony PlayStation on May 31, 1999 (and for Microsoft Windows on September 30 of that same year); as the name implies, it stars the Warner Bros. mascot Bugs Bunny (who, on his way to Pismo Beach, accidentally finds and activates a time machine, which immediately propels him through five different eras of time and leaves him to find his own way back to the present day of 1999 A.D.). Through the tuition of sorcerer Merlin Munroe (from the 1955 short Knight-mare Hare), Bugs has to travel between eras and collect Golden Carrots and Clocks, which shall open up new locations, and help him to return to the present day - however, this will not be easy because several other Warner Bros. characters including Elmer Fudd, Daffy Duck, Witch Hazel, Yosemite Sam, Rocky & Muggsy and Marvin the Martian are conspiring to prevent him from returning to the present day (but Merlin will grant him several magical abilities on the way).

Because this game is partially non-linear (as Bugs shall need a varying amount of items to enter the levels but he can leave one without entirely completing it), this guide is going to list the levels by the eras in which they are based, and the amount of Clocks (or Golden Carrots) required to enter them; the first ("training") level, Nowhere, does not require any items to enter, but the last one, Train Your Brain, requires 117 Clocks, which is just three less than the amount needed to return to the present day, even though there are a total of 124 in the game. Also, if the player manages to collect all 124 clocks (and 333 Golden Carrots), the end credits will get displayed at Pismo Beach (as opposed to Bugs' home in a forest, which is where they will get displayed if he should miss even a single item).