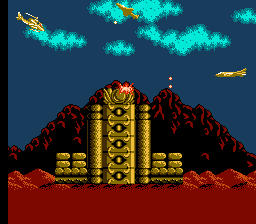 When you proceed, enemy jets will fly through the area. As long as they aren't on a collision course with you, you won't be in any extra danger, but fire rapidly to clear them out of the sky just in case. A short distance later, you will find a building with an orb on the roof. Shoot the orb until the building collapses and leave a hole in the ground. Fly down through the hole.

In the first room, a small tank guards a wall with a blue orb on top. Destroy the tank and then shoot the orb until the wall crumbles. Then proceed to the right and fire down at the ground as you go to clear away enemy soldiers and tanks. Shoot the orb at the top of the small structure on the right to destroy it and reveal a hole in the floor. 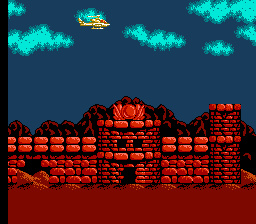 Turn your helicopter so it faces left, and fly down through the hole. Remove the tank and land on the short platform on top of the green structure to locate another weapons depot. You'll receive two new upgrades: Super Engines and Fire Bomb. It's a good idea to switch to Fire Bomb since it will help you remove tanks more easily. However, switching to Super Engines underground is only advised if you know the area particularly well and aren't worried about crashing into the terrain.

The next tank that appears to the left have particularly accurate homing missiles that are difficult to avoid and can make short work of you quickly. You are a bit safer if you stay low to the ground. Use fire bombs to take out that tank, then rescue the three hostages that come out of the building. You'll have to quickly destroy the same tank and rescue the hostages repeatedly, until one final hostage appears for rescue. Then retrace your steps through the underground and return to the surface.

Back on the surface, you may wish to switch to the Super Engine and give it a try. You'll fly over the terrain quickly enough to avoid any ground threats. Jet planes will continue to attack. A structure will pop out of the ground along the way, but it's actually not a threat of any kind. You can ignore it and continue on to the right.

After flying a bit further, a hostage will appear on the roof of a tower. Be sure to stop and collect him. As you continue, cannons will dot the roofs of the next structures that you fly over. When you reach the end of the scrolling, you'll see a building with another orb on the roof. Remove any cannons that protect the building, and then shoot the orb until the building collapses, and you can fly through the hole it creates.

In the first room you'll find a tank that will actually run away if you don't destroy it in time. You'll see a statue of a beast to the left. Shoot the head to remove the statues and proceed to the left. In the next room, you'll see what looks like a blue platform, but it's actually a chute down to the lower level.

Drop down below, and you'll see a green structure with a tank guarding it. Land on top of the structure to find another weapon depot. You'll receive the following upgrades: Armour and Homing Missiles. Armour is applied automatically, so you don't have to select it. As for the Homing Missiles, you're probably better off sticking with the Fire Bomb for now.

Destroy the orb on the wall to the right and fly through the opening. You'll find a tank guarding a building. This tank has guided missiles which are dangerous, but nowhere near as precise as the ones from the tank you encountered in the first underground. Use a fire bomb to destroy it. As hostages start appearing from the building, the ceiling will slowly begin to sink towards the floor. This puts a time pressure on you to rescue three hostages very quickly, and then destroy another tank before three more hostages can appear. Continue to do this as quickly as you can until all of the hostages have escaped from the building and made it safely to the helicopter. Then you will complete the mission and advance to the next stage.