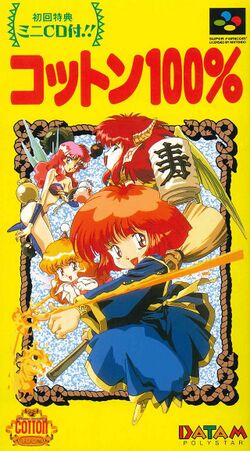 Cotton 100% is a 1994 scrolling shooter video game developed by Success and originally published by Datam Polystar for the Super Famicom. The second installment in the Cotton franchise, it is a follow-up to Cotton: Fantastic Night Dreams. In the game, players assume the role of the titular young witch who, alongside her fairy companion Silk, sets out on her broomstick on a quest to defeat several monsters and get her Willow candy. Its gameplay is similar to the first game, mainly consisting of shooting mixed with role-playing game-esque elements using a main four-button configuration.

Cotton 100% garnered generally positive reception from critics who reviewed the original Super Famicom version as an import title. Most reviewers compared the game with other shoot 'em up titles like Keio Flying Squadron, Parodius and Pop'n TwinBee, being praised for its audiovisual presentation and gameplay but criticized for the short length and lack of two-player mode. It was later ported to the PlayStation in 2003 as a budget release, featuring downgrades compared with the original version. It was also re-released for Nintendo Switch and PlayStation 4 across western regions in 2021, marking the game's first official international appearance.