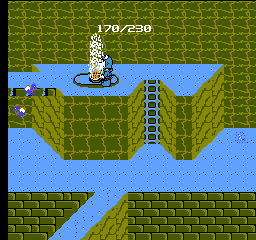 Burn the bells in the Holy flame

Once you have collected all of the bells from the Towers, you'll have to burn them in the holy flame. Whether you burned a few before, or saved them all for one trip to the flame, you'll have to make sure all of them are burned before the Rubas Gate will open. All of your hit points will be restored. 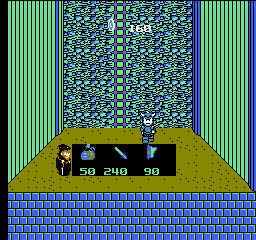 Buying a green scroll in the dungeon

The fastest way back to the starting location of the game (besides dying and continuing) is to use a green scroll. And fortunately, you can pick up a green scroll extremely quickly. Head south from the cliff wall, and head right along the north wall. Find the entrance to Dungeon 9. From the entrance, move one room right and enter the shop. There's a green scroll for sale there for 90 Ludder. At this point, you can use the scroll immediately to return to the start, but you may wish to wait and shop for one more item: Blue Potions. Blue Potions restore all of your hit points. They can only be found in Shop 3 (priced 90) and 8 (priced 99), but they are worth the effort. 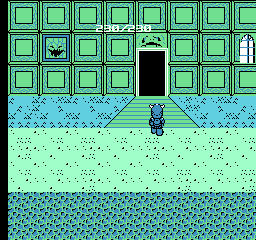 Once you have returned to the starting location, you must walk past the entrance to the rest of the castle and on to the gate which used to be locked. Now that all seven bells are burned, the gate will be open, and you can advance to the final section of the game. 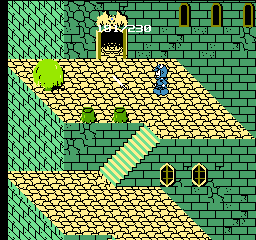 You'll have to climb one final pathway in order to reach the entrance of Rubas' chamber. There are a number of bats that you'll have to face on the way up, as well as the large Fire Ghosts. Do your best to avoid getting hit on the way up. Just before the entrance to the lair, you will find the Splendor lying on the ground, waiting for you to collect and equip it. Without this sword, you have no chance to beat Rubas. 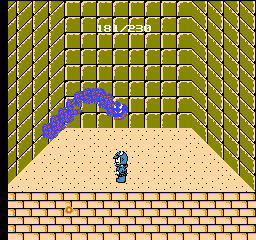 The first fight is against a Dragon. The Dragon resembles the Centipede boss, except that it doesn't follow a large wave motion. It tends to move roughly in a circular motion around the floor. Because of this, it's quite possible to predict its motion, move out of the way, and complete the fight without taking any damage as long as you fire quickly enough. Your best bet is to attack it diagonally as it passes you by. It takes a lot of hits, even with the Splendor, but you can destroy it quickly if you're careful with your shots. 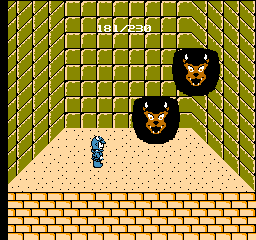 The next fight after the Dragon is with twin Demon Lion heads. They fly back and forth across the screen while they swoop up and down. When they are both high on the screen, it's best to stay below them. However, when they begin to drop down, it is actually a little safe to try to stay between the heads. It doesn't matter which head you attack with your sword, they share a single pool of hit points. You may take a lot of damage in this fight if you don't position yourself carefully. Be prepared to use a potion or two to maintain your hitpoints. 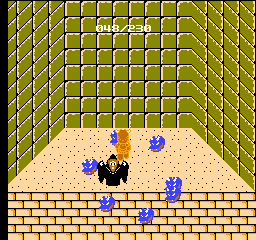 The final fight is with Rubas himself. If you've managed to hold on to the Blue Necklace all this time, this is precisely the time to use it. Activating the Blue Necklace will render you invincible for a short while, but it should be just long enough to fight Rubas and defeat him. Rubas spins around the room, depositing demon heads all over the floor. Touching them or Rubas will take off a substantial amount of health, but you needn't worry about that if the Blue Necklace is working. Once you use it, attack Rubas immediately. Strike him as quickly as you can, and he should go down before the Blue Necklace wears off. You will then be treated to the end of the game and the staff credits. Congratulations.