From StrategyWiki, the video game walkthrough and strategy guide wiki
(Redirected from Disgaea 5 Complete)
Jump to navigation Jump to search

Disgaea 5: Alliance of Vengeance/Table of Contents 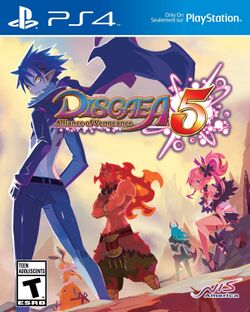 Disgaea 5: Alliance of Vengeance is a 2015 Tactical role-playing game for the PlayStation 4 and is the fifth main game in the Disgaea series by Nippon Ichi Software. The game tells the story of Killia, a powerful demon Overlord seeking revenge against Void Dark, a Demon Emperor who has been devastating numerous Netherworlds. The game was released in Japan on March 26, 2015, in North America on October 6, 2015, and in Europe on October 16, 2015. The game was ported to the Nintendo Switch and released under the title Disgaea 5 Complete on March 3, 2017 in Japan, May 23, 2017 in North America, and May 26, 2017 in Europe.

Disgaea 5: Alliance of Vengeance/Table of Contents

Spinoffs: Makai Kingdom: Chronicles of the Sacred Tome · Prinny: Can I Really Be the Hero? · Disgaea Infinite · Prinny 2: Dawn of Operation Panties, Dood!