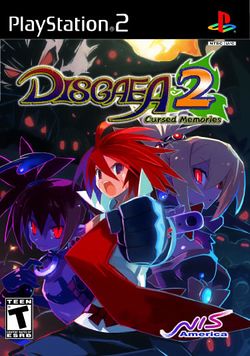 Disgaea 2: Cursed Memories (魔界戦記ディスガイア2, Makai Senki Disugaia Tsū?, lit. "Netherworld Battle Chronicle: Disgaea 2") is a tactical role-playing game developed and originally published by Nippon Ichi Software for the PlayStation 2 video game console. Disgaea 2 is the sequel to 2003's Disgaea: Hour of Darkness for the PlayStation 2 and was released in Japan on February 23, 2006 and North America on August 29, 2006.

Disgaea 2 combines turn-based strategy with a morbid sense of humor in an oddball and abstract universe, poking fun at both itself and numerous other pop culture references along the way. Disgaea is usually best remembered for it's unique Item World, a series of randomly generated dungeons bound to any and every item in the game. In combination with a series of challenging side quests to unlock, a dedicated player could easily enjoy over a hundred hours of gameplay without having completed all the side quests, nor found all the special items and characters.

Unlike Nippon Ichi's previous games, Disgaea 2 is on DVD-ROM and has an animated opening movie.

A PSP Port of the game named "Disgaea 2: Dark Hero Days" was recently released, with extra content, DLC Support, additional members to recruit to your battle party, and an extra storyline featuring Axel, the Dark Hero.

Fifteen years ago, a powerful Overlord by the name of Zenon appeared on Veldime and cursed its human population with the intent to create a new Netherworld to rule. The curse slowly drained the humans of their life energy, turning them into demons and robbing them of their long term memories. Fast forward fifteen years, where our budding young hero Adell, the only human unaffected by Zenon's curse, has sworn to defeat Zenon and return his family to human form. In a botched attempt to summon Overlord Zenon, Adell's mother summons instead his daughter Rozalin. Adell and his mother decide to use Rozalin to lead them to Zenon, so that Adell can defeat him and fulfill his promise to restore his family to human form. Meanwhile, Rozalin must cope with an internal conflict between purposefully leading Adell astray vs. her desire to finally meet a father she has never seen.