The Dark World could be best described as an alternate dimension to the main story stages. All main stages (excluding the final boss fight) have a more difficult "Dark World" version, with their own set of enemies, geo panels, and an extra added challenge from the Dark Sun. Opponent levels begin where the Story stages leave off, starting at Lvl 80 and going up from there. By completing certain requirements on each normal stage, the Dark World equivalent can be opened. However, you must first unlock the Dark World dimensional guide before any stages can be unlocked.

The enemies you'll face in the Dark World are usually from the higher tiers of their respective class (5th and 6th most commonly). They give much better EXP and HL than lower tiers, and this is one of the primary benefits of clearing Dark World stages. Working in your favor is that many of your opponents will be poorly equipped compared to those of similar level/class typically encountered in the Item World, and that makes them a lot easier to dispatch. Dark World stages also have rather high Bonus Ranks as compared to their relative difficulty. Unfortunately many stages have pretty strict time limits, so you won't have a lot of rounds to fill it.

Five hidden switches are scattered throughout Holt Village, each activated by pressing

while Adell is in their general location. When one is pressed, a sound effect will roll and a dialogue box will pop up. All must be activated to awaken the Dark World dimensional guide, Friday MKII. The locations are listed below, and don't worry, they can be pressed in any order. 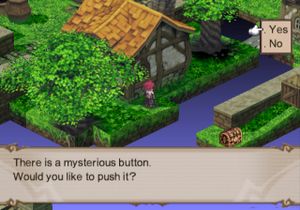 Behind the house near the Zombie character. 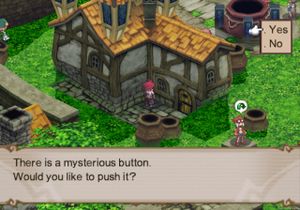 Behind Adell's house, in the concave corner where two walls intersect. 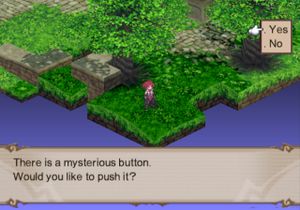 Near the Ghost character, in the clearing between the trees and the map's corner. 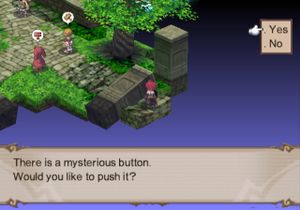 Behind the Red Skull (character who awards you Subpoenas), at the corner between the fallen pillar and the edge of the map. 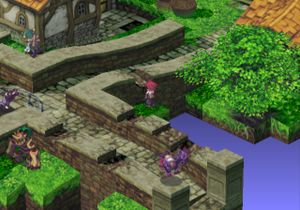 In the area of the Wood Golem and Mothman, there are some breaks in the brick railing that you can jump over. Face the break in the wall as pictured above to hit the switch.

If you can't find one of the switches, don't worry, just move onto the next one. You could have forgotten you pressed it previously. The activated switches won't reset until you start a new cycle.

Once all five are pressed, a dialogue box will read something along the lines of "A dark shadow looms over Holt Village". Friday MKII, a shadow-version of the Archer class, will suddenly appear near the Ghost character. Until you clear the Tutorial maps (if not done so already) all she will say is "...". Once you have cleared the Tutorial maps, you can talk to her three times and each time her response should be a couple dots longer than the previous talk attempt. On the fourth time she will finally respond. She will ask you a question, answer yes to fight her right there in Holt Village (or answer no, if you don't think you're strong enough yet). Her defeat will allow you to use her as the Dark World dimensional guide, but let's not get ahead of schedule, first you'll have to fight her.

Friday MKII's equipment and stats will vary slightly whenever you face her, but she is always Lv100. If this is your first run through the game with this save file, defeating her could be a challenge (but the Dark World's difficulty might be too much if you can't win, so there wouldn't be much point anyway). If you're having trouble, remember that as an Archer, Friday MKII's RES is generally higher than her DEF, so it would be best to use ATK and HIT-based attacks instead of spells. If you have difficulty reaching her with several units because of the distance between your base panel and Friday MKII, take out a defensive character (such as Heavy Knight or Fighter, either equipped with multiple armors) to lure her out into proximal range. In any case, remember to utilize combo attacks, and keep your characters separated to avoid multiple units becoming victim to her Zielregen area-of-effect attack.

Be wary of the other villagers as well. Some of them may decide to join the fray. This can be problematic as the village's healer Tileyfa will sometimes come running into the fray to deliver a heroic rescue! ... in the form of a 25-40 pt healing spell. Joy. So if she butts into your business, toss her off a safe ways. And if some townsfolk do get killed,you can either quit and reload, or you may win the battle, save and then quit and reload your game. If you're only around Lv20-30 and don't think you have a chance to win, take out a Thief (or several, if you have more than one) with equipment focused around HIT. Make sure you can use the class-specific specials Steal Consciousness, to put her to sleep, and Steal Health, to slowly drain her HP with poison. Steal Freedom isn't much of a help, because she's still likely to attack due to the long range of her bow. Inflicting Amnesia with Steal Memory could be beneficial to take away her stronger attacks if she wakes up, but it should take precedence behind Sleep and Poison. If you still have trouble hitting her with the Thief's specials, use a long string of combos, with Steal Consciousness last in the line (don't use this method while Friday MKII is asleep, as the damage could wake her up), to significantly boost accuracy. It doesn't really matter if the other attacks used do damage or even hit, as they'll still add onto the combo's accuracy bonus.

After her defeat, Friday MKII will appear as the Dark World Dimensional Guide next to the regular Dimensional Guide, Friday. Be warned that she only appears in Holt Village (Or by Axel's house if playing in Axel Mode), not the maps found in Chapter 6 or Chapter 7. Now you can speak with her to access the Dark World stage selection, but Stage 1-1: Beginner's Field will be the only available stage for now.

Upon the start of a new cycle, Friday MKII will still be standing as your Dark World guide, but she will only say "..." until you complete the first set of Tutorial stages, after which you can activate her by talking to her four times successively.

You can also unlock the Dark World in Axel Mode, which is available only in the PSP Version of Disgaea 2. The same mechanics apply as to how you will activate Dark World in Holt Village. The only difference between the two is the location of the five switches. Here are the different spots where the switches are located:

As stated earlier, to get more stages available in the Dark World selection, certain requirements must be passed for each individual stage. You must first defeat the main stages normally, and then enter them again to pass the Dark World unlocking requirements.

Upon completing some requirements for the Dark World stages, you will be instantly transported to the Dark World version of the stage. On others, you will be prompted as to whether or not you want to go the Dark World stage you just unlocked - If you select no, the stage will still appear in Friday MKII's selection. Of course, it will also appear if you select "yes" and clear the stage, but not if you are defeated. "Optional" transport stages usually require you to defeat all enemies while fulfilling certain requirements, while "Instant" stages typically only need you to perform a specified action. All Dark World Stages must be re-unlocked upon starting a new cycle while playing the PS2 Version.

Note that if you are playing in Axel Mode, you will only have access to the Dark World versions of Axel's stages. If you want to play the Dark stages in Normal Mode, you must activate Normal Mode by completing your current cycle and choosing to play as Adell, or start a new Normal Mode game.

The infamous Dark Sun is an aspect unique to all Dark World stages, a giant flaming orb hovering above every map.

Every turn, excluding the first, the Sun will activate a special action to weaken your group. These actions can range from inflicting status ailments to all of your female characters, inflicting direct damage to your units, to even activating an instantaneous Game Over. What effects take place depends on the stage and current round, but you can check and plan ahead for the "Dark Sun Report" by holding in

anywhere on the map when you're not highlighting a character.

If enemies have numbers above their heads, that means they intend on sacrificing themselves and ascending up to the Dark Sun in the specified amount of turns. A "1" signifies they will ascend next turn. Upon ascending, that foe's level will be added onto all enemy characters currently on the map. If you defeat foes before their timer reaches zero, they will not ascend, and your enemies will not level up because of it.

Your foes aren't the only ones who can ascend, as a unique "Ascend" option appears in the action menu while in a Dark World stage. By selecting this, the chosen character will sacrifice themselves and ascend up to the Dark Sun, and attempt to infiltrate and destroy it. It's uncertain what determines how great the Ascendant's chances of winning are, but warrior-type characters seem to have the best chances, and wizard-types the worst chances. Levels and stats also seem to have an effect; the stronger your stats, the greater your Dark Sun-destroying ability. If you create a tower and select "Ascend" with the bottommost character, only the top character will be sent off, but with a significantly boosted chance of destroying the Dark Sun. Even if one of your characters fails in their destruction attempt, they will take down the Dark Sun's strength (as noted in the "Sun" sidebar, under the Bonus Gauge), and make it easier for another to Ascend and destroy the nuisance. The "difficulty" stated at the beginning of each stage directly correlates to how much damage the Dark Sun can take.

Ally characters with Felonies who ascend to the Dark Sun won't do any damage to it. Instead, their level will just be added to all enemies' levels, similar to how an enemy ascends.

There are some general guidelines for clearing Dark World stages:

In the following stage-by-stage walkthroughs, it is recommended you are either in Episode 13, or you have cleared it and are on your second-or-later cycle. While it isn't necessary to defeat the stages in the methods listed in this guide, these strategies are made so you can defeat enemies with ease and without the need to exceed your foes' stats.