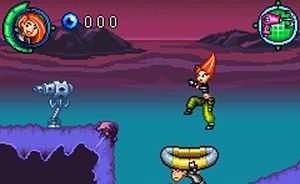 Kim and Ron working together.

Kim is the best fighter in the game for combat purposes (at least until Ron acquires his Mystical Monkey Power). Her moves chain together nicely and she’s got decent speed to hit her opponent before they can hit her. She also has the ability to swing on branches and pipes and even gains the ability to perform somersaults later in the game. This allows her to jumper wider gaps and also launch more powerful attacks. However, because she learns more moves than Ron, it will require more time to learn how to use her effectively. Spend as much training time at Global Justice as you need in order to master her arsenal. Remember, a skilled Kim player is a good Kim player.

Ron isn’t quite as gifted a fighter as Kim in the early goings, but by defeating Monkey Fist in the first level, all that changes. The Mystical Monkey Power Foot Stomp that Ron acquires instantly becomes the most powerful move in the game. Use it every chance you get. Not only can it lay waste to stone walls, but it also wipes out multiple enemies in one hit, no matter how much damage they can take. It doesn’t work on Bosses, unfortunately, but it does turn Ron into your best enforcer against the game’s various henchmen. In fact, single players would be wise to send Ron ahead and wipe out any enemies you encounter, allowing Kim to traverse safely. Since Ron’s only real move is his Mystical Monkey Power, he tends to be a little more user friendly than Kim. However, mastering his gadgets will be necessary.

Rufus isn’t so much a playable character in this game as much as he is one of Ron’s items. However, you do need him to unlock various openings that Kim and Ron can’t reach on their own. He can also open mini games and puzzles for you to play as you go. Still, you need to take care. While Rufus does have access to his famous choppers, he can only use them against brambles and wires that block his way, not for actually attacking. In fact, any enemy he touches sends him right back into Ron’s pocket, forcing you to start all over again. He also can only be out of Ron’s pocket for a limited period of time, so keep an eye on his timer once you’ve let him out.