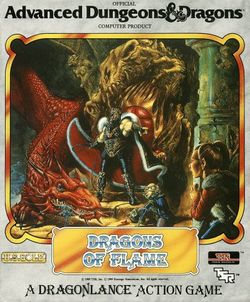 Dragons of Flame is the sequel to the poorly-received Heroes of the Lance. Among the things improved are the controls and the difficulty level. The overall difficulty has been toned down and the playability increased with the addition of several features and items that you can pick up. The game is still pretty short, though. Like the previous Silver Box title, it's an action-adventure game instead of a role-playing game.

The Famicom version was never released outside Japan. A fan translation patch exists.

Note that the most popular port is different from the ones with the most advanced graphics.