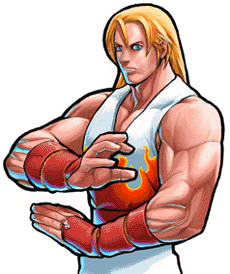 A bit moved towards emotions and fury, Andy has a hard time controlling his impulses. He tries so hard to surpass his brother Terry and to exact revenge on Geese, that he almost forgets all about himself. He finds his true love in Mai, whom Andy really loves, although he's afraid to admit it, since he is so insecure. Still, he cares a lot for his friends, his brother, and Mai, although in the mean time, Andy has to take the pressure of silence!