Mai Shiranui (不知火) is the granddaughter of Hanzo Shiranui, master of Ninjitsu and Koppo-ken. Mai learned from her father the secrets of Ninjitsu, and became an expert in stealth and other sneaky tricks. She is deeply in love with Andy Bogard, though their relationship is unclear most of the times. 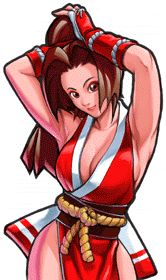 Mai is quite a dangerous fighter. Not only does her exceptional body mesmerize opponents, but her ability to create flaming attacks with her fans and the tail of her outfit will also lead the opponent into sure defeat. Mai's love for Andy knows no limits or time, since Mai hasn't seemed to given up, even after so many years of denials and wasted attempts to seduce Andy. If there is one thing that Mai does have, it's persistence!