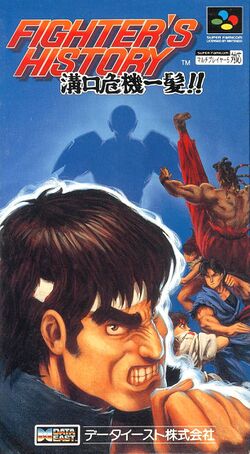 Fighter's History: Mizoguchi Kiki Ippatsu!! is a 1995 fighting game developed by Data East. It's the third game in the Fighter's History series, and the last one published by Data East. The gameplay system is largely unchanged from its predecessor, Karnov's Revenge, but a few new additions made it to the game, including a new game mode where Mizoguchi is the protagonist, and the new character Chelnov, the hero of Data East's action game Atomic Runner Chelnov.

The gameplay system is largely the same as Karnov's Revenge. Using the 4-button control configuration, striking an opponent's weak point will temporarily stun the opponent, and cause the opponent to sustain greater damage when it's hit afterward. In addition to the story-based Mizoguchi Mode, there are also three new game modes (Practice, Tag Battle, and Survival) in addition to the traditional CPU Battle and 2-Player Versus Modes.

There are nine playable characters in this installment, as five of the characters from the previous Fighter's History games were cut from the roster (Ray, Jean, Matlok, Samchay, and Marstorius). Chelnov, the main character from Data East's arcade game Atomic Runner Chelnov, appears in this game as the final boss, as well as a hidden character playable via a code. Ray, Jean, Matlok, Samchay and Marstorius, while not playable, appear during the story sequences of the Mizoguchi Mode.

Like the Saturn version of Karnov's Revenge, the player can assign all four basic attacks into a single button (

by default). The Practice Mode is a tutorial that teaches players how to perform various combos with each character. By completing all of the exercises given, the player is taught how to perform a new special technique for their character.