When you return to Balamb Garden, the instructor will send you to the dormatory to change into your SeeD uniform, and return to the lobby. She will state the assignment for the field exam, assigning your partner Zell and squad leader Seifer.

You will need to drive your vehicle to the dock, and enter the ship. You will receive the briefing on the boat.

About 72 hours ago, Dollet was attacked by the Galbadian Army, and your team is to clear out the enemies from within the city. You will encounter Dollet, secure the town center, and withdraw when ordered. Seifer will order you to look outside, do so (failure reduces rank).

When you disembark, you will be judged on your performance. In general:

Enter the city - there is a save point up the first stairs you can use. When you advance, you will be attacked by a pair of G-Soldiers. The next few screens also have G-Soldier pairs, finishing at the town center. When ordered to find the last enemies, one G-Soldier will hide at the back right corner.

When all enemies are defeated, wait. When the scene shifts to Zell pacing back and forth, approach Seifer, and watch the soldiers head towards the radio tower.

On the path to the Radio tower, you will receive random encounters. When you encounter the Dollet soldier, you'll have your first battle against a monster. In the next encounter, Seifer will claim the finishing blow awards EXP, but this is a lie and may be safely ignored.

When you reach the radio tower, Seifer will leave the party, and is replaced by Selphie. She will try chasing after the captain by jumping off the cliff - it's better conduct to take the path instead, but likewise jumping is slightly faster. Enter the tower.

Inside the tower is a Blind draw point, and a save point. Use the elevator to go up.

At the top of the tower, you will fight against Major Biggs. Shortly into combat, Wedge will join in the battle. Shortly after that, a whirlwind will blot Biggs and Wedge away, replacing with the boss Elvoret.

After defeating Elvoret, Selphie will tell Seifer new orders - a withdrawl to the shore. This leaves 30 minutes to exit the tower. Take the lift down. On the lower floor, you will not have another opportunity to adjust your party setup, thus you should make sure you are prepared for the upcoming boss fight. Ideally, you can have the thunder spell able to cast for all three opponents. 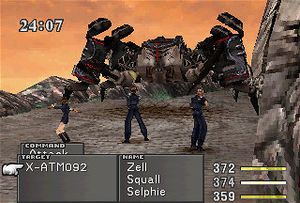 As soon as you exit the tower, you will encounter X-ATM092. This mechanical enemy will chase the group back to town, and uses plenty of physical attacks that can be defended against by drawing Protect and casting it on the party. It is vulnerable to the thunder damage. On the first battle, you should inflict enough damage to it so that it enters the repair sequence, then flee.

After the first battle, you may choose to take it down, although it will be a long battle. It will self repair when it takes 20% damage (1000), and brings it up to full. It can self repair five times in a single battle. Once depleted, you can simply use the most powerful spells available to defeat them.

If not defeated, it will otherwise chase after you. While most scenes allow you to outrun the machine, a few places are a bit tricky. On the mountain stairs, X-ATM092 may cause the ground to shake, requiring you to walk (

) down the steps. At the bridge, X-ATM092 will jump over the party, requiring you to run back to force it to jump over you again. In the town square, you should shoo the dog out of the way.

Enter the hotel, go upstairs to get a magazine - choosing whether or not to read it will affect a future cutscene.

In the harbor city, there is a draw point where you can collect Thunder. There is also an item shop to the left. While there is also an upgrade shop, there's not much to be offered there. If desired, you can enter the houses on the right to speak with Zell's mother.

When you return to Balamb Garden, you can speak with your instructor at the main lobby. Seifer is found to the right, and a conversation can be found there. Eventually, an announcement will instruct you to head to the second floor - wait in the hallway to get called up. You will graduate, and receive the rank report based on how well you performed.

Your rank is composed of five categories:

The final initial rank is not determined from the points shown, but rather the modifiers based on them. An average performance would place the player in Rank 5, while getting the best in each category is enough to put the player in rank 9. Destroying the X-ATM092 will give an extra rank, equivalent to the best score in one rank.