This page contains unnecessary drivel. As our aim is to present helpful and complete guides for games, pages do not need to contain unnecessary information, such as the names of contributors, or mini guides for editing. If you are qualified, please edit it to remove the drivel, and then remove this template from the page.

This page contains unnecessary drivel. As our aim is to present helpful and complete guides for games, pages do not need to contain unnecessary information, such as the names of contributors, or mini guides for editing. If you are qualified, please edit it to remove the drivel, and then remove this template from the page.

This article gives an overview of the characters in Final Fantasy VIII. 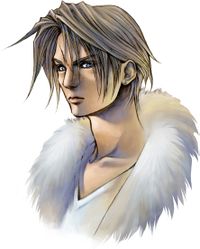 Squall Leonhart (スコール・レオンハート Sukōru Reonhāto) is the main character of Final Fantasy VIII. Squall is an antisocial, introvert and cold person. His archrival is Seifer Almasy, who left a scar in his face on a training. Squall uses a Gunblade, a sword with a trigger which can increase the damage. Gunblade users are very rare due to it's difficults on using, so only him and Seifer in Balamb Garden have that skill.

Behaviour: In a large game such as Final Fantasy VIII, having the main character be a brooding, cold, serious-to-a-fault loner has had its effect on the populace of gamers in some very different ways. Squall's personality has been the sole reason people hate FFVIII, it has also been quite the opposite. Squall initially may seem like a lone-wolf type character, but players will get insights into his thought process throughout the game. Over the course of the plot, players will see that the seemingly antisocial Squall is more complex than perhaps his introduction suggests, a notion echoed by Squall himself near the start of the game.

The game begins among Squall's last year at Balamb Garden, the Gardens (Trabia, Galbadia, and Balamb) being schools that educate kids how to live, survive, and learn in a world that is unnaturally overpopulated with strange, malevolent creatures. They are high school and college rolled into one, they are the only forms of higher education and weapons training in the world of FFVIII.

Squall has a bit of a rivalry going with another student, Seifer. Squall keeps to his introverted self, focuses on his gunblade skills and is quickly becoming one of the top martial artists in the school. Seifer, arrogant and hot-tempered, is in his fifth year, having failed to graduate the year prior.

Squall and Seifer are the only two at the school using a very difficult weapon, the gunblade. They enjoy sparring, sometimes to injury, and it is in this way that their rivalry shows it's nature as a meeting of opposites.

To expound further on this idea: FFVIII is very much a game of characters playing opposites, and the marketing for the game supports this theory. Pairings include:

These appear to be the three main pairings and work to form the bed of relationships in which Squall's personal story sits.

Finally, more than anything else, it is important to note here that Squall Leonhart does not desire the company of anyone. He believes that people get in the way, that they need saving, and that for this reason, someone always gets hurt. Better to avoid such problems as such a stance has served him well over the years. That is until he meets the free spirited Rinoa Heartilly and falls in love with her and opens up more. 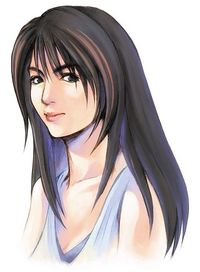 Daughter of General Caraway, a high-ranking officer in the Galbadian army, and Julia Heartilly, a successful pianist and singer, Rinoa Heartilly (リノア・ハーティリー Rinoa Hātirī) is a member of the "Forest Owls", a small resistance faction seeking to liberate the small nation of Timber from Galbadian occupation. Rinoa is a very emotive person, and often act based on her insticts and emotions.

Limit Break: Combine (using her best friend, Angelo), or Angel Wing (A Limit Break sort of like Berserk, except with supreme magic power.)

Behavior: Outspoken, spirited, emotional and compassionate (and a bit immature, which sort of gives her the nickname "Princess"), Rinoa is in many ways the polar opposite of the cold and antisocial Squall. Although their personalities do clash at first, Squall and Rinoa gradually fall in love, and their relationship is a major focus of the game's storyline. Nevertheless, Rinoa has proven to be extremely stubborn towards her ideas and will push another person's buttons until she gets her way. Unfortunately, Squall is the only person she knows that is actually willing enough to shut her off. Ironically, he gives in later in the game.

As the game progresses, Rinoa will appear during Squall's Graduation Dance as the mysterious young woman who pulls him into the dance. Nonetheless, destiny has it that they meet again, in the Timber on the Forest Owl's hideout. Wanting to free Timber from Deling City's rule would prove to be an uphill battle, which drags in Squall and the other SeeDs. From there, Rinoa would not stop until Timber is freed and will soon follow Squall and the rest of the SeeDs on their journey.

Of course, with two polar opposites meet, mayhem is caused. Rinoa and Squall, obviously, do not get along at first, just because they just can't see each other's views. Rinoa keeps plugging away at Squall, and Squall keeps giving her the "cold shoulder". However, as the game progresses, Squall soon realizes how much he doesn't want to be alone, especially with someone like Rinoa by his side. And that's when things start to warm up a little. Rinoa had already fallen in love with Squall, even though it's not noticable at first. Opening Squall deeper and deeper, Rinoa would soon show her feeling towards him, especially after the "Oath" they have near Edea's Garden. Unfortunately for Rinoa, opening Squall would be like opening a 5000 page novel, and only scratching the surface.

Keep in mind, Squall lets Rinoa have his favorite lion-ring of Griever. Something she was willing to return, but Squall would refuse and let her keep. Kind of like a mini gift from Squall's heart. Also, Rinoa would be saved by Squall twice: once from a clipped of cliff on the Balamb Garden and another when she has lost all hope in outer space. Adds points to Squall, doesn't it? 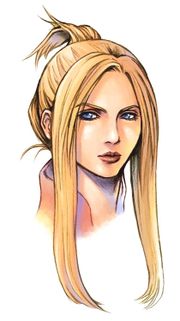 Quistis Trepe (キスティス・トゥリープ Kisutisu Turīpu) enrolled at Balamb Garden at the age of ten and joined SeeD at fifteen, becoming, shortly after, an instructor for Balamb Garden. She is Squall and Seifer's instructor. Quistis is fairly insecure and prone to depression. 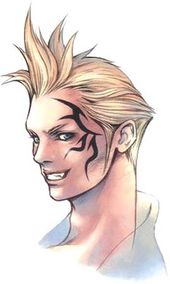 
Zell Dincht (ゼル・ディン Zeru Din) joined Balamb Garden when he was 13 years old, expecting to follow his grandfather's footsteps as a great soldier. Zell specializes in martial arts and is a very enthusiastic person. He normally acts without thinking, and can be easily angered. 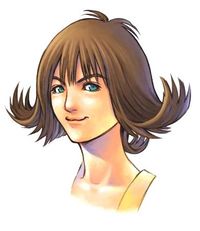 
Selphie Tilmitt (セルフィ・ティルミット Serufi Tirumitto) is a very naive person, somewhat childish, but full of enthusiasm, always cheering up when people get down. Selphie is highly talented with computers and machinery. She was transfered from Trabia Garden to Balamb Garden, and became obsessed with organizing the Garden Festival, since the original person charged the task left Balamb Garden. 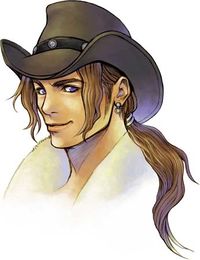 
Referred to as the 'Best Shooter in Garden' due to his great sharpshooting abilities, Irvine Kinneas (アーヴァイン・キニアス Āvain Kiniasu) calls himself "ladies man", trying to charm every beautiful woman that he finds on his way. However, Irvine loses his cool under extreme pressure, a prominent weakness in a sharpshooter. 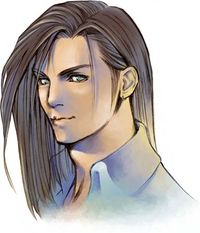 
Laguna Loire (ラグナ・レウァール Raguna Rewāru) is a Galbadian soldier, very optimistic and with a big heart to help those in need. However, he can be extremely clumsy. Laguna wants to be a reporter so that he can share his adventures--along with his friends and fellow Galbadian soliders, Kiros and Ward--with the world. Laguna also fell in love with Julia, a famous pianist who played in the bar of the Galbadian Hotel.