To receive one Speed-Up, Missiles, two Options, and Barrier, pause the game and enter the famous Konami Code:

, and unpause the game. This can be performed once, plus one more time for each time a Big Core boss is destroyed before its core turns red.

To continue the game from the start of the last stage you visited, enter the following code while the Game Over message is onscreen:

, then wait for the screen to change. If done correctly, you'll be taken back to gameplay instead of the title screen.

Press and hold the

buttons on either controller while you power on or reset the machine.

For the NES Classic Edition, the second controller works best. The first controller only works if you press the buttons precisely when the game loads. 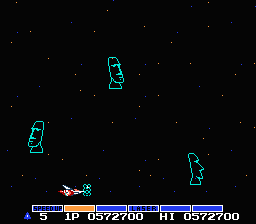 There are three mechanisms in the game that allow you to warp ahead past one stage. They are only found in stages 1, 2, and 3. Warps are activated if you fulfill the proper conditions for each stage and defeat the Big Core on that stage. Once the warp is activated, you will rush through space while you encounter randomly positioned spinning Moai heads that you must dodge. The most you can warp is two times, once from stage 1 to stage 3, and again from stage 3 to stage 5.

Stage 1 warp: To activate the warp to stage 3, you must destroy each of the four hatches that appear on this stage when the thousands digit of your score is even. Of the four hatches, three are on the lower portion and one is on the upper portion.

Stage 2 warp: To activate the warp to stage 4, you must destroy the Big Core within two seconds of the core turning blue. This is only possible with very well placed shots from lasers.

Stage 3 warp: To activate the warp to stage 5, you must destroy 10 or more Moai statues. Use missiles to destroy bottom lying faces, and double-shot or options to destroy top lying faces.

Collect power-ups until the "?" power-up is highlighted. When the thousands digit of your score is 0 or 5, collect another power-up to receive a bonus.

Rapid fire: This power-up is activated when your thousands digit is 0. Rapid fire allows you to hold

to continuously fire shots. Like normal power-ups, it is lost when you die.

To receive one Speed-Up, Missiles, four Options, and Shields, pause the game and enter the famous Konami Code:

, and unpause the game.

To begin the game with 30 extra lives, press and hold

at the title screen, and press

The MSX version of Gradius contains hidden entrances to secret bonus stages. If you occupy the correct location of four particular stages, you will be sent to a bonus stage similar in nature to the second stage, and advance to the next stage upon its completion. The bonus stages are analogous to the bonus stages found in the Super Nintendo conversion of Gradius III. They contain two new types of capsules; green and yellow. Green capsules provide you with one extra life. Yellow capsules provide you with an increasing number of bonus points, starting at 100 and increasing to a maximum of 10,000 points, but only if you never fail to collect a single capsule. If one yellow capsule scrolls off the screen, the point value will reset to 100. Some locations contain several yellow capsules and you must remain in place in order to collect all of them. Below are indications of every bonus stage entrance. 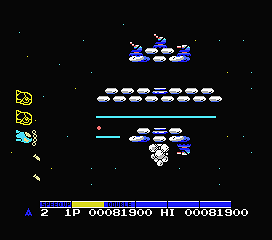 Most MSX consoles contained not one, but two cartridge slots. If you place Konami's TwinBee cartridge in the second slot while you play with Gradius in the first cartridge slot, you will play through the game as the TwinBee ship. Power-up capsules will take the form of bells (although they will not "fall" to the left side of the screen, as they do in TwinBee or Parodius) and your Options will be glowing outlines of TwinBee. Even the shield will look different.

How to play
Appendices
Walkthrough
Retrieved from "https://strategywiki.org/w/index.php?title=Gradius/Secrets&oldid=822291"
Hidden category: