A catalyst field (left). The same field with the resource display on, indicating richer areas.

As with most RTS games, resource gathering and management is an important part of the game. In Grey Goo, there is only one type of resource: Catalyst, which is collected by extractors. This bluish-white liquid is used to construct additional extractors, miners, and other units.

Opening the resource display with Ctrl + Z will show brighter sections of the field which indicate increased extractor efficiency, as well as how much catalyst is in the field itself. 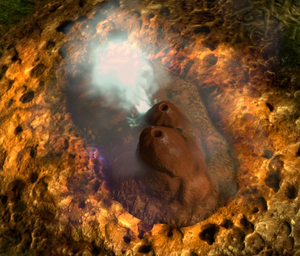 A catalyst field, blocked by a vent plug.

Human and beta refineries can only support one extractor. 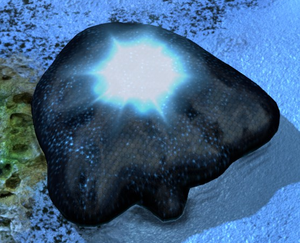 The team-coloured light above this mother goo indicates it is digesting a spigot.

The goo does not construct refineries - instead, their mother goo can "eat" a spigot. Once eaten, the mother goo's health and size increases slowly as the spigot is digested. Once it is of the right size, the mother goo can split into small or large proteans to produce units - or additional mothers.

Mothers, therefore, do not have to remain on a resource field like an extractor. They can eat the spigot, then move onto another field or a safer location.

Catalyst fields eventually run out of catalyst. While they do regenerate slowly, it is usually best to find a new field rather than wait.

The drain rate for Human and Beta players.

Beta and Human players, when using purchasing units, do not have the full cost deducted. Instead, each factory or construction order drains catalyst at a steady rate. If the drain rate is positive, you are gaining more catalyst than you are spending - factories and construction will proceed at its usual pace. If negative, your catalyst reserves will begin depleting - if they hit zero, construction will stutter as your harvesters struggle to keep reserves up - or they will be paused completely if no resources are received.

Pausing the construction of units or factories can temporarily alleviate a low resource situation, allowing the other orders to be processed at a usual pace.

Beta and human players have a resource cap of 1000 units of catalyst. This can be improved by constructing additional silo structures.

Shroud players have a resource cap of 10,000, but cannot build silos.