Aside from your headquarters - which can only be rebuilt if destroyed - players will need to construct a variety of units and structures to achieve victory. 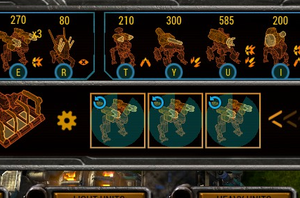 This large factory will produce an endless stream of Predators.

on the currently constructed unit. Shroud factories cannot do this, as they must pay up-front for their units.

Goo units are constructed from proteans ("blobs"), which are spawned by sacrificing the health pool of a mother goo.

Shroud factories function much like beta and human factories. Rather than attachments, however, Shroud factories must have adjacent Amplifiers to unlock additional construction options. 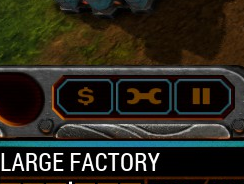 All structures can be repaired, sold (destroying the structure and refunding its cost), or paused.

The beta and the human factions can construct walls. Beta walls have towers that can be mounted by certain units, essentially turning them into turrets. Other sections of wall can be turned into gates to allow friendly units to pass through. Human walls cannot be mounted in the same way, but instead automatically allow friendly units to pass through it. Walls take 10 times more damage when attacked while under construction.

Beta structures require a hub to be built, and hubs can be built any place you have vision on the map.

Human structures must be connected to the headquarters via a power conduit. Human bases are thus generally confined to their section of the map. Human harvesters are much faster, much smaller, and come in greater numbers than the beta, allowing them to harvest resources from across the map much easier.