From StrategyWiki, the video game walkthrough and strategy guide wiki
(Redirected from Ijji)
Jump to navigation Jump to search 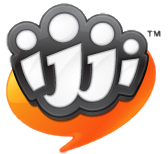