It Came from the Desert

From StrategyWiki, the video game walkthrough and strategy guide wiki
Jump to navigation Jump to search
It Came from the Desert | Table of Contents | Gameplay | Walkthrough 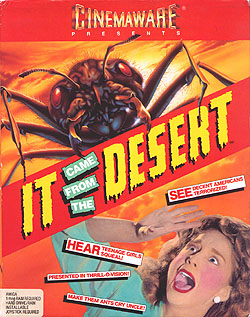 It Came from the Desert is a 1989 computer game by Cinemaware. It was originally released for the Amiga, but later ported to other systems, as well as released in distinctly different forms to consoles. The game is a fairly non-linear combination of dialogue boxes and several types of action scenes, typical of contemporary Cinemaware releases.

The game is set in 1951. When the rural American town of Lizard Breath witnesses a meteor fall, town geologist and player character Greg Bradley has to discover the source of some strange occurrences. His role as a young man of science in a 1950s movie setting also gives Bradley the ability to operate aircraft, heavy machinery and several types of firearms, and to suffer no injury worse than a flesh wound unless he's committing a heroic sacrifice. It also has some funny moments, such as when Greg Bradley wakes up in hospital suffering 'extreme exhaustion' after the girl he saved 'thanks him' for rescuing her.