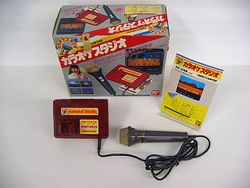 Karaoke Studio (カラオケスタジオ, Karaoke Studio?) is a music game designed by Bandai in 1987 for Nintendo's Famicom. Physically the game acts as a subsystem designed to be inserted into the Family Computer cartridge slot. Several levels of the game can be played on the subsystem alone, and additionally, smaller expansion cartridges (originally available for separate purchase) providing additional levels and other new content can be plugged directly into the Karaoke Studio subsystem. The game comes with a microphone peripheral capable of detecting a human voice.

Gameplay consists of singing along in a karaoke-manner to a series of Japanese pop songs. The player is scored on accuracy of singing. The songs have been converted into 8-bit format for use with the Famicom and as the music plays and the song's lyrics are shown, on-screen depictions of the song's themes are displayed in the background simultaneously. 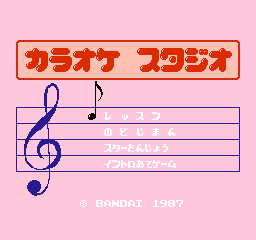