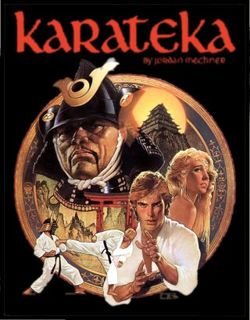 Karateka was a ground-breaking game, originally designed in 1984 by Jordan Mechner for the Apple II. Jordan Mechner is also the creator of the well-known title Prince of Persia. Before he took us on an adventure in Persia, he taught us how to fight in Japan. Karateka went above and beyond the average levels of quality that were typically seen in computer games at the time. Fully fleshed out fighting animation, coupled with cinematic cut scenes underscored by a poignant musical backdrop, presented players not only with an experience on par with arcade quality graphics, but a story telling experience that simply could not be captured in an arcade.

Karateka tells the story of a lone martial arts master whole swims across an ocean and scales a cliff to single handedly fight the ruler of the island, along with his entire army, and rescue his true love. He will have to engage in one-on-one combat over and over again as he closes the distance between him and the ruler. Each fight is a fight to the death, and every combatant is stronger than the last. A few traps and attacks from a per bird must also be avoided in order to succeed.

Jordan Mechner's masterpiece of a game was supplied to gamers by Brøderbund Software, who eventually ported it to other systems. Programmer Robert Cook was responsible for the converting it to the Atari 8-bit series of computers. It was so popular, it was one of the few American titles brought over to Japan for play on the Famicom. After it was also converted for the Commodore 64 and the IBM, Atari eventually bought the rights to distribute the game on their systems, and distributed the original game on their redesigned XE Game System, as well as the Atari 7800, which is generally considered the worst conversion of the game. In 2012 a remake, also called Karateka, was released for several platforms, featuring updated visuals and gameplay.

High atop a craggy cliff, guarded by an army of fierce warriors stands the fortress of the evil warlord Akuma. Deep in the darkest dungeon of the castle Akuma gloats over his lovely captive, the princess Mariko.

You are one trained in the way of karate: a Karateka. Alone and unarmed, you must defeat Akuma rescue the beautiful Mariko.

Put fear and self-concern behind you. Focus your will on your objective, accepting death as a possibility. This is the way of the Karateka.