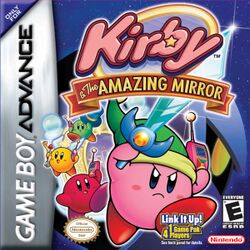 Kirby & the Amazing Mirror (星のカービィ 鏡の大迷宮, Hoshi no Kaabii Kagami no Daimeikyuu?, Kirby of the Stars: The Great Mirror Labyrinth) (typeset with a capital 'The'), is a Kirby game released in 2004 for the Game Boy Advance. It is the last Kirby game for the Game Boy Advance and is the only Kirby title where Kirby's nemesis King Dedede doesn't make an appearance. Kirby & the Amazing Mirror is also an adventure-based game, rather than a linear side-scroller. This game bears similarities to The Legend of Zelda: Four Swords also published by Nintendo and released around the same time. Both are multiplayer adventure games that use the concept of the main character being split into four color coded individuals allowing for cooperation in solving puzzles. The game was re-released in Europe for Club Nintendo members only.

There is a parallel universe called the Mirror World, with an entrance (that is like a mirror) that exists high in the skies of Dream Land. It is a world where any wish reflected in the mirror will come true. But one day, it only copies evil minds, and rapidly changes into a world of evil as a result. Meta Knight notices this and recognizes this as a threat to not only the Mirror World, but also to his native Dream Land, and visits the Mirror World to save the two worlds. Meanwhile, Kirby is taking a walk, when Dark Meta Knight - an evil Mirror World version of Meta Knight - appears. But before Kirby can react, Dark Meta Knight slices Kirby into four differently-colored "Kirbys". At this point, they have to share the same Warp Star. Kirby normally travels alone, but if his cell phone is working, he can call his friends and they will help him. The four Kirbys chase after Dark Meta Knight and enter the Mirror World.

The two Meta Knights fight each other, but the real Meta Knight is defeated. He is knocked into the mirror, which is then cut into eight fragments by Dark Meta Knight (which are then scattered across the Mirror World) - so now it's up to Kirby and his new "clones" to save Meta Knight, the Mirror World, and Dream Land...

...So, they decide to venture through the Mirror World, collect the Mirror Shards and reunite them, so they can gain access to the area where Meta Knight is being held and defeat Dark Meta Knight (and also to defeat the mastermind behind the whole thing, Dark Mind). At the end, it shows that all the Kirbys have their own Warp Stars, showing that they are heroes in their own right.