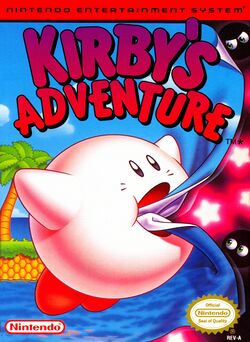 Kirby's Adventure is the only Nintendo Entertainment System Kirby video game, and is the second game in the Kirby series, following his debut on the Game Boy in Kirby's Dream Land. It has since been remade on the Game Boy Advance as Kirby: Nightmare in Dream Land.

The original version has been released on the Wii's Virtual Console. It was released in North America on February 12, 2007, in Europe on February 16, 2007, and in Japan on February 27, 2007. It was also one of the 12 "Masterpieces" (demos of famous games) provided in Super Smash Bros. Brawl. It was also included in Kirby's Dream Collection. A 3D version was released for the Nintendo 3DS in the 3D Classics line with graphical glitches and slow downs fixed. The original version was also released on the Wii U's Virtual Console.