During the cutscene, the survivors will shoot from the weapon ports as the zombies approach before exiting the train. Some of these zombies will be CEDA agents, and may be carrying bile bombs that you can collect.

Continue to the dock below, and collect your weapon and first aid kit. The AIs will normally take shotguns. In this section, you will want at least one molotov or carry a gas can with you, although any boomer bile will be acceptable.

Proceed forward through the gate. and take a left turn towards the two buildings. The far building may contain items, while the building on the left provides an alternate path that can shoot down the following alley, which may be taken instead of the stairs. The alleyway also has explosive barrels, which can also burn any incoming infected.

Exit the alley at the end, and take a right. The large entrance to the right may have a weapon that you can grab. Walk under the bridge and climb up until you reach the boat shack. Circle around the shack, and either proceed through the street, or in the building (where there are a few items). Past this building will be a set of parked boats and cars, as well as a barricade, which is passed by going through the building on the left. A train track will be found on the left. 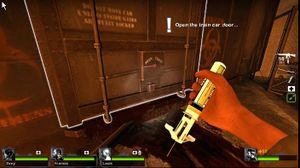 The Car door for the tank.

When you jump down, collect the weapon (if it replaces an early weapon or sniper rifle). Clear all infected in the area before entering the train cart. Have one volunteer open the door to the cart; this will activate the tank, and trigger the horde at the same time. The volunteer should use adrenaline to quickly get some distance.

If you have them, throw both the boomer bile and molotov on the tank. The combination should ensure it dies quickly from both the horde and the gradual burning. Once the tank is destroyed, you can go through the other side of the train. You will need to walk around a few train cars before entering the brick factory.

After the tracks, the first building on the right contains a few items, such as explosives or pills. Continue to the factory by passing through the left path through the bricks before the right hand turn.

When you enter the factory, you need to reach the upper floor by taking a right-hand turn. Go through the door at the end, where you reach a large warehouse section. The overseer's office is up the steps, which may contain a first aid kit. To reach the safehouse, run around the brick storage, and proceed to the room in the corner.