The car was useful in escaping, but it's unable to go through miles of stopped cars. The four survivors now need to walk the rest of the way.

The highway has heavy cover to obscure view of the infected, created by both parked cars and trucks. You will start with basic weapons to take care of any infected.

As you advance, you will eventually reach a section of the highway blockaded by trucks. You will have to take the offramp at this point, and turn left at the corner. This leads to a small motel, where you can either approach directly, or take a scenic route to the left, between the two bridges. If you take this route you end up on a roof on the right side of the motel entrance. This route normally has hunting rifles so you can camp there for a while and pick off the infected in relative safety.

The motel will have a good chance of useful items. To get past the motel, climb to the second floor. On the far side, you may have to walk through a few rooms. Once you are near the road, you will have to climb up the stairs once again, to go behind the motel. 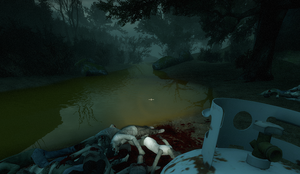 The ravine behind the Motel

Behind the motel is a large ravine. Try to aim for the flat ground as you Slide down to the bottom, as they usually contain usable items. Once down, you will enter a swampy area; walk along the swamp until an opening appears to your left.

The Whispering Oaks fair should be in view. Avoid the car alarm, and enter the safe house.

There are two respawn locations in the map:

Scavenge requires the survivors to power the generator in the pool area of the motel. The play extends from the motel itself to the highway bridge.

Survival takes place within the Motel area, but removes most of the defensive constructions that could be used. Even if the survivors found one, the enemy tanks would easily overpower them.

[Go to top]← Dark Carnival | The Highway | The Fairgrounds →