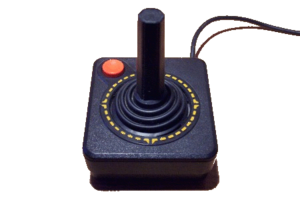 Move your player throughout each stage with your system's joystick. Pushing left or right makes the player run to the left or to the right. If there is a wire in the direction that they player is running in, he will immediately grab the wire and begin to shimmy across it. Pushing up or down makes the player climb or descend ladders. Pushing down while holding a wire will cause the player to immediately release the wire and fall down.

The fire button, or buttons, can be used to dig holes in the floor. The type of controller you have determines how the fire button functions. If the system you are playing on has only one fire button, then the player will dig a hole in the direction that he is facing. So if for example you wish to dig a whole to the left, you must be facing left before you press the fire button. Likewise for the right. If the system you are playing on has at least two fire buttons, then one fire button (typically the one on the left) will dig a hole to the left, and another (on the right) will dig a hole to the right. These two fire buttons will dig holes in the manner regardless of the direction that the player is facing. Be aware that holes are dug rather quickly, but not instantaneously. You can be killed while in the process of digging a hole if you start too late.

Regardless of your identity and purpose, you must grab all of the items contained on a level before you can activate the escape ladder that takes you to the level beyond. You can run, climb, and suspend from a wire. In each level, there are a number of opponents bent on stopping you. Collision with any of them is fatal, but you have one weapon at your disposal: the ability to dig holes. You can dig them either to the left of you or to the right. Holes remain in place for a period of time and automatically refill themselves. Use the holes to get enemies off of your back, or to drop from one platform to another. Be aware however, that you can become trapped in your own. Unlike the enemies, you can not pull yourself out so you are doomed to wait until you get crushed when the hole refills. It is also important to realize that you can put yourself in a hopeless situation by trapping yourself in a spot from which escape is impossible. On such occasions, each system has a button that you may press to instantly end your life and begin the level anew.

Regardless of whether you're the good guy and they are the bad guys, or vice versa, your enemies pursue you relentlessly. They attempt to find the quickest route to your location, and will only stop when they find themselves trapped or up against an impassable obstacle. If you dig a hole between you and your enemies, they will fall in to them helplessly. Unlike you, even if there is no floor beneath the hole, they will become stuck while you can fall harmlessly through. They will remain in the hole for a short period of time until either they decide they've had enough and pull themselves out, or the hole begins to fill itself back up, crushing them inside. Unfortunately, filling the hole back up just redeposits the crushed enemy somewhere towards the top of the stage, and their pursuit resumes.

It is important to note that enemies can collect and carry pieces of loot if they pass by one. While holding loot, the appearance of the enemy changes slightly (most often a small change in color) to indicate that this enemy is holding something. Enemies can voluntarily drop the loot on occasion, but the most certain way to get them to drop it, is to make them fall into a hole that you dig. Note that you cannot exit a level until every piece of loot is in your possession, even those held by an enemy. In some levels, you may be required to take advantage of this fact by killing an enemy only to have them reappear above some piece of loot that you cannot otherwise reach.