This takes place in Areas 1 and 2 in the Mysterious Lab. His intro is the same as the one you see when you turn in the game, so you can skip it if you want to.

You'll start off in Reploid form, with a simple buster that cannot charge, and only fires 3 shots.

When you start moving, you'll see two guard robots ahead. you can finish them off with 3 shots from your buster. In between the first two platforms, there is a fire drill bot that will come at you from above, so watch your back. After the second platform, there is a pipe with gas escaping. Jump above that, or you'll be hurt. After that , finish off another guard, and watch out for another fire drill bot as you come down the platform. Go through the door to reach the next room.

There is a row of breakable glass that you can shoot for fun, then you'll run into two flying beetles and a block. These beetles are more annoying than dangerous, one shot takes care of them. The block can be rid of in 5 shots. you'll move on to a platform with another block. jump and shoot that down as well. Watch out for another fire drill bot as you leave the room. you can finish them in 3 shots.

There is a guard bot there as you enter, and one at the top of the ladder you climb. Finish both of them off, and if you want the Max energy capsule, shoot the block in front of it 5 times. Go down the other ladder to face 2 flying beetles and two fire drills near to each other, one coming from the ceiling, the other from the ground just a bit further from it. there's the door a bit further on.

Boss Door
This type of door is the signature that the boss is next, so you should prepare yourself. If you're low in health, you can go back to nearby enemies and defeat them until you get energy capsules from them.

When you enter, you'll see another leaky pipe, this time, its above where you walk. take out the guard that's there, and then hold

when walking to crouch to get underneath it. There's also another one at the end of the pipe. when you get past that, watch out for a drill bot just before the next platform coming from the ceiling. This next platform also has a pipe from the ceiling, and is itself a pipe, so after you crouch underneath the first gas line, jump over the next gas line. There are 3 more leaks, above below and above. At every above gas stream, a beetle will appear, which you can nail off. At the end of all that, there's a medium sized energy capsule for your efforts. There's another fire drill bot at the start of the next platform, so watch out for it, as well as two guard bots before heading over to the last door. Once you go through this door, there's a short passageway before you face the boss. 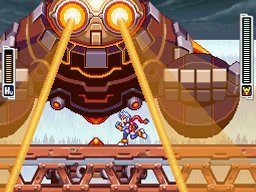 Grey taking on the first boss.

This boss is the same machine depending who you play was, but it operates differently between Grey and Ashe. The boss is Dogu the Giant, and has two attacks. The first is a slam attack where he uses one hand do slam the other, which is always the one the player is standing on. To avoid it, simply move off the hand you're standing on when Dogu's other hand appears above you. His other attack is a little harder to avoid; he opens both eyes and shoots a laser beam that sweeps the boss arena. To avoid it, go to the very center of the stage and the lasers will stop before they hit you. Be wary, because soon after the lasers disappear Dogu will open his mouth and drop bombs into the space below. To kill him, you'll need to stand on his hands and shoot his eyes, as the rest of his body is invulnerable.