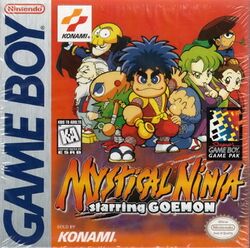 This guide is for the Game Boy game. For the Nintendo 64 game with the same name, see Mystical Ninja Starring Goemon.

Mystical Ninja Starring Goemon (がんばれゴエモン〜黒船党の謎〜, Ganbare Goemon: Kurofune Tō no Nazo?, lit. "Go Goemon: Mystery of the Black Ship Gang") is a Legend of the Mystical Ninja series Game Boy game released in 1998. Featuring gameplay similar to the Super Famicom title Ganbare Goemon 3: Shishijūrokubē no Karakuri Manji Gatame, the game presents a new story in which Yae has been kidnapped by the Black Ship Gang. Its release immediately followed the Nintendo 64 game of the same name.

Mystical Ninja Starring Goemon featured three characters—Goemon, Sasuke, and Ebisumaru—who can walk, jump, attack, and throw weapons throughout five stages of play. Goemon enjoyed average abilities; Ebisumaru could throw farther but suffered athletically, while Sasuke could jump high but could not throw as well as the others. Players control one character at a time to move through each stage and defeat enemies, who attack with close-range and projectile weapons. If a player's character is hit by an enemy, his hit points are decreased; if all are exhausted, the character loses a life and the stage is restarted from the beginning. Hit points can be replenished via hearts scattered throughout the game. At maximum hit points, characters are capable of long-range special attacks. At the end of each stage is a boss enemy with higher health and stronger attacks than other foes. Mystical Ninja features some puzzle elements and mini games, such as fetch quests producing items needed to cross inhospitable terrain or quizzes for bonus items. The game's music kept with the style of other Ganbare Goemon games by employing an "oriental sound." It is compatible with the Super Game Boy and contains a special decorative border for play in this fashion.

After Yae is kidnapped, Goemon, Ebisumaru, and Sasuke set out to find the Black Ship Gang and rescue her. They first assault Karakuri Castle, the pirates' hideout, where they learn that Baron Skull—the captain of the group—lured Yae to his hideout. They pursue Baron to the Demon Cave, where Goemon discovers clues left behind by the female ninja. They take him to the Black Ship Skull, the flagship of the pirates moored in Gull Harbor. Goemon and his friends destroy the ship without locating Yae, and are aghast to see a second Black Ship Gang vessel sail into harbor. They board it and continue the quest, eventually wresting Yae from Baron Skull's hold.