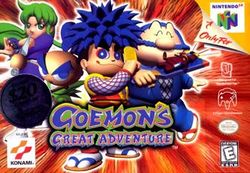 Goemon's Great Adventure (Ganbare Goemon: Derodero Douchu Obake Tenkomori), known as Mystical Ninja 2: Starring Goemon in Europe, is the second game of the Ganbare Goemon series on the N64. The third game on the N64 was released in Japan only. The game follows Goemon and his friends Ebisumaru, Yae, and Sasuke, as they try to thwart the evil plans of Bismaru who is trying to revive the demon Dochuki by using the summoning machine she stole from the Wiseman. Set in Japan, you will guide Goemon and his friends through the 2.5D side-scrolling world and stop Bismaru and Dochuki.

editLegend of the Mystical Ninja series