From StrategyWiki, the video game walkthrough and strategy guide wiki
(Redirected from Ninja Gaiden Sigma Plus)
Jump to navigation Jump to search 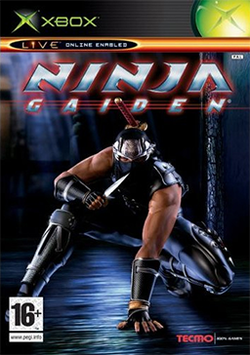 Ninja Gaiden is an action-adventure game developed by Team Ninja for the Xbox, and later updated for the PlayStation 3 as Ninja Gaiden Sigma. It went through five years of development before its release by Tecmo in 2004, and has been progressively enhanced with a number of expansion packs and two remakes, Ninja Gaiden Black and Ninja Gaiden Sigma. The game follows the fictional story of Ryu Hayabusa, a ninja, in his quest to recover a stolen sword and avenge the slaughter of his clan.

Inspired by the 1990s Ninja Gaiden series, this game is set in a re-imagined world based on the Dead or Alive series of fighting games, another Team Ninja creation. Tecmo specifically targeted Ninja Gaiden at a non-Japanese audience, and despite difficulties in obtaining content ratings due to the game's graphic depictions of violence, it was generally well received, with 362,441 copies sold in North America in its first month. However, the game had to be censored for release in some regions, and Japanese sales were poor, with only 60,000 in the four months following its début.

Making use of the Xbox's internet connectivity, Ninja Gaiden was the focus of a series of online contests that spanned North America, Europe, and Japan. Record-breaking numbers of players took part, competing for places in the live final, which was held during the 2004 Tokyo Game Show. Noted for its fluid and responsive control system, technical merit, and the significant challenge it offers to even experienced gamers, Ninja Gaiden is regarded by several critics as one of the best and most difficult games ever made. Team Ninja continued to update the game after its release, making available two Hurricane Packs for free download that added extra content, gameplay challenges, and game engine improvements. These were incorporated into a 2005 remake, entitled Ninja Gaiden Black, that was regarded by the game's creator as the definitive version. Two years later the game was ported to the PlayStation 3 and released as Ninja Gaiden Sigma; despite taking advantage of the PS3's improved hardware, this incarnation was regarded by some as flawed in comparison to the Xbox originals. An enhanced version of Sigma was released for the PlayStation Vita in 2012 as Ninja Gaiden Sigma Plus.