This page needs to be split into subpages. The move list should be subpages

This page needs to be split into subpages. The move list should be subpages 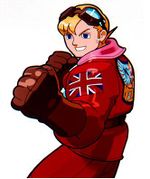 Edward Falcon, known as Edward Fokker in the Japanese series, is the main character of the Power Stone series. He is a 21 year-old aviator hailing from the town of Londo. He circles the world in his beloved airplane Hockenheim, searching for the legendary Power Stones revealed to him by an ancient family artifact. Though he can be a bit of a flirt, he is generally regarded as being well mannered and gentlemanly. He has a strong sense of justice and vanquishes evil with explosive punches and sharp moves. In the anime, Falcon has a crush on Rouge.

Fighting Characteristics
Falcon is a balanced and easy to control character. He has no major strengths or weaknesses, though it should be noted that he is one of the two characters that can perform a double jump. This makes it a little easier for him to dodge certain attacks.

Combo Chains
Falcon has a boxing fighting style so his combos feature lots of powerful punches. His list of combos are as follows.

Unique Attacks
For a middle-weight character, Falcon has very acrobatic attack moves. The following are some of his unique and environmental attacks. 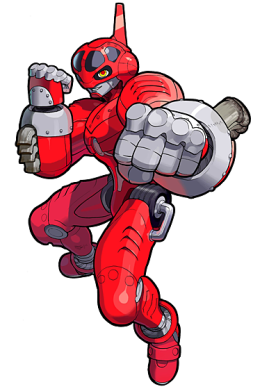 Falcon turns in to a rocket powered cyborg in his Power Change. Like in all Power Fusion modes, he gains access to powerful special and super attacks. Each attack is designed to be used at either close or long range. His attacks in this mode involve, rockets, explosives and fire.